NYC Day 65: I Return to The Met Museum in Search of The Arts of Mexico 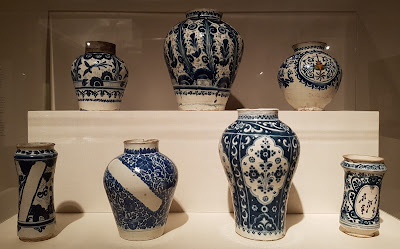 Above: A collection of tin-glazed earthenware dating from around 1660 to 1800
...
With exactly three weeks left of my twelve week New York stay remaining, it was time to shake myself out of my stupor and get back out among it. After all, I can sleep all day every day for a week, once I get back home. I may never return to this amazing city again, and now is not the time to be sleeping the days away. With that refreshed attitude in mind I made my way back to the Metropolitan Museum on Fifth Avenue. I decided to focus my visit on the exhibition, Collecting the Arts of Mexico, on view in the Joyce B. Cowin Gallery (Room 749) on the second floor of the American Wing.

There are two major parts to this small but important exhibition. The first, highlights a number of pieces of Mexican pottery donated by Emily Johnston De Forest and her husband Robert, and includes works by Nicolás Enríquez, and others. 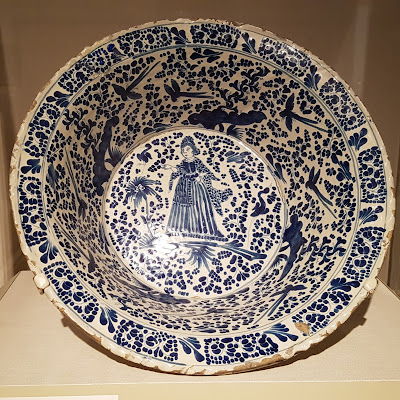 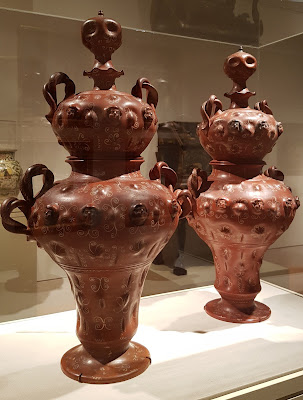 Above and detail below: Pair of Jars (17th Century Earthenware) 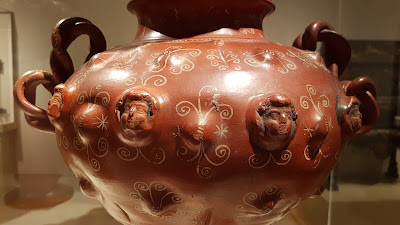 
In 1911, Emily Johnston de Forest gave her collection of pottery from Mexico to The Met. Calling it "Mexican maiolica," she highlighted its importance as a North American artistic achievement. De Forest was the daughter of the Museum's first president and, with her husband, Robert, a founder of The American Wing. The De Forests envisioned building a collection of Mexican art, and, even though their ambitions were frustrated at the time, the foundational gift of more than one hundred pieces of pottery anchors The Met's holdings. Today, more than a century later, their vision resonates as the Museum commits to collecting and exhibiting not just the arts of Mexico, but all of Latin America.. 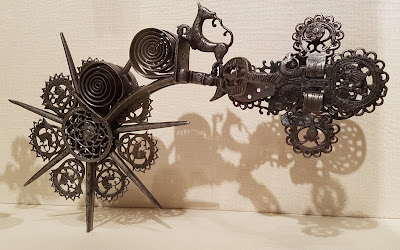 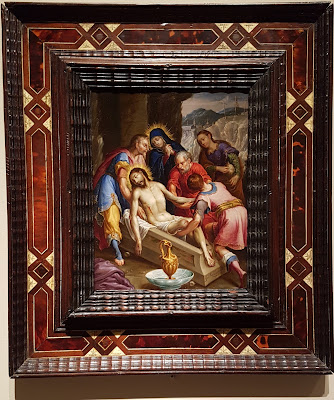 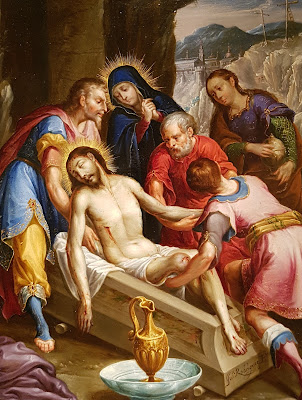 ...
The Paintings of Nicolás Enríquez


In 1783, Juan Bautista Echeverría wrote his last will and testament in preparation for the perilous journey from Mexico City to his native Navarre in northern Spain. Echeverría, who had gone to Mexico as a youth in the mid-1750s, returned to Spain nearly thirty years later, having amassed a considerable fortune. Among the prized possessions he took with him was a suite of five paintings on copper by Nicolás Enríquez, who signed each of them "made in Mexico in the year 1773." The set, which was recently acquired by the Museum, is preserved intact, a rare occurrence that illuminates not only the artistic accomplishment of the painter who made them but the spiritual aspirations of the person who owned them.

The paintings were intended for Echeverría's private devotional use and the choice of subject matter is highly personal. Nicolás Enríquez lavished special attention on the painting of Echeverría's namesake, Saint John the Baptist, detailing the crystalline drops of water poured over Christ's head and the gentle current of the river that flows around his submerged feet. Another painting borrows a composition from Rubens to represent the Holy Family as an earthly Trinity. 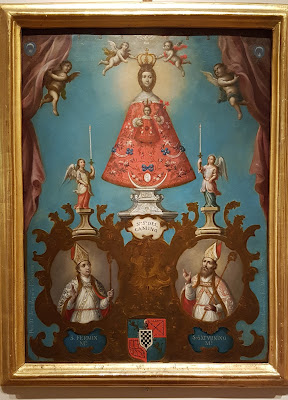 Above and Detail below: The Virgin of El Camino with St. Fermin and St. Saturnino
By Nicolas Enriquez (Mexico, 1704-1790) 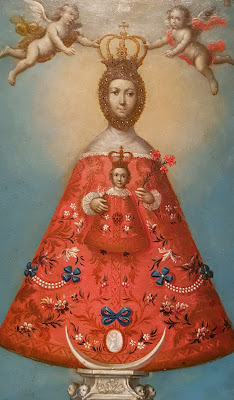 Three of the five paintings depict miraculous images that reflect Echeverría's Spanish roots as well as his extended residence in Mexico. The Virgin of El Camino is especially venerated in Pamplona, the principal city of Navarre. The painting copies a print that was used to solicit funds for the building of a new chapel for the image. Another painting represents the appearance of the Virgin to Saint James atop a stone pillar near the city of Zaragoza. The Virgin of El Pilar is venerated throughout the Spanish world, but in Mexico City the devotion is associated with the convent church known as the Enseñanza, whose founder was, like Echeverría, of Navarrese descent. The third painting depicts the Mexican Virgin of Guadalupe, which is encircled by four scenes that corroborate the divine origin of the image. They record the Virgin Mary's appearances to the Indian Juan Diego at Tepeyac, near Mexico City, and culminate in the revelation of her image, miraculously imprinted on his cloak. Echeverría apparently was not satisfied to own a mere representation of the Virgin of Guadalupe, and he soon shipped it back to Mexico to be touched by the original image, an act certified by an inscription added to the painting in 1789. 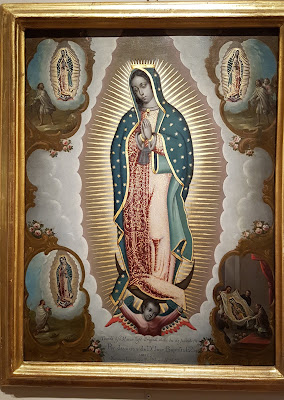 Above and detail below: The Virgin of Guadalupe and the Four Apparitions
Nicolas Enriquez (Mexico, 1704-1790) 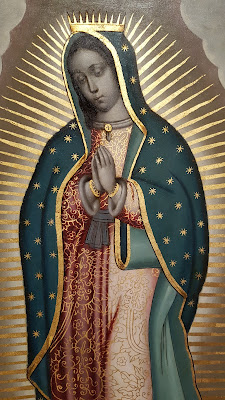 I also made a visit to another small but important exhibition, Frederick Remington at The Met, but that's a story for another day.

From the Metropolitan Museum I made way to the Museum of Modern Art to catch a screening of the Alex Proyas movie, Dark City. The film, made in 1998, is part of MoMA's current season of Sci-Fi movies called Future Imperfect: The Uncanny in Science Fiction. The season winds up at the end of the August and features some seventy movies. But that's a story for another day as well.

Any questions, comments or suggestions? How about complaints or compliments? Let me know via the comments box below.
Posted by Jim Lesses at 2:03 AM