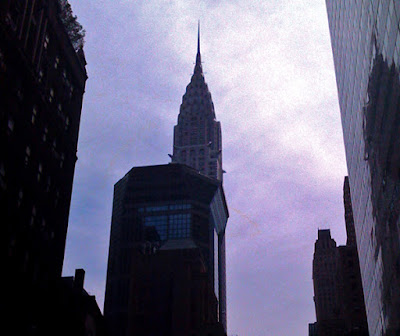 ...
I know, I know. The Empire State Building has long claimed the honour of New York City’s most iconic building, but for my money, the Chrysler Building leaves the ESB for dead. For me, there is something incredibly attractive about the Chrysler Building as it rises high over the streets of Manhattan. I think it has to do with the shape and colour of the building’s top floors as they catch and reflect the rays of the sun in a way the Empire State Building doesn’t.

The Chrysler Building is an Art Deco skyscraper, located on the east side of Manhattan at the intersection of 42nd Street and Lexington Avenue. For 11 months it could lay claim to being the world’s tallest building (at 319 metres/1,047 feet), before it was surpassed by the Empire State Building in 1931. 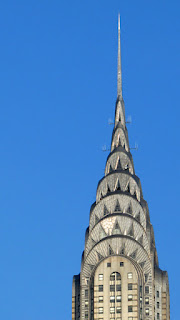 In 2007, the Chrysler Building was ranked ninth on the List of America's Favorite Architecture by the American Institute of Architects. It was the headquarters of the Chrysler Corporation from 1930 until the mid-1950s, but the corporation did not pay for the construction of it and never owned it. Walter P. Chrysler decided to pay for it himself, so that his children could inherit it.
The building (declared a National Historic Landmark in 1976), is recognized for its terraced crown, which is composed of seven radiating terraced arches. The stainless-steel cladding is ribbed and riveted in a radiating sunburst pattern featuring triangular vaulted windows, which give the building its iconic crown.