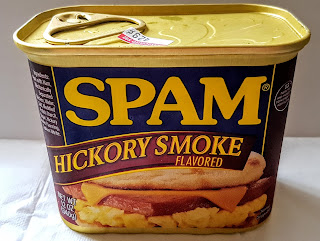 ...
A second day in this week, although I did head out to my local supermarket to stock up on grocery items to see me through the next week or so of breakfasts and the occasional evening meal in. Today's expenses are entirely grocery shopping related. Since I need to write about something, I have included my shopping list below. I will almost certainly supplement this shopping expedition with a few other items during the week when my current supply of olives, eggs, and avocados run out.

The most unusual and unexpected item on this list for me is the SPAM. I have a vague recollection of having bought Spam only once before in my life, and I don't think I liked it much at all. So why buy it now? I don't rightly know. It was one of those spur of the moment purchases, and I thought it might be interesting to see whether fried up slices of the stuff with eggs might actually be okay. Oh, c'mon. Where's your sense of adventure? Besides, it's 'Hickory Smoke Flavored' so it can't be all bad, can it? Can it? [No pun intended]

From Wikipedia we learn:


Spam (stylized SPAM) is a brand of canned cooked meat made by Hormel Foods Corporation. It was first introduced in 1937 and gained popularity worldwide after its use during World War II. By 2003, Spam was sold in 41 countries on six continents and trademarked in over 100 countries (except in the Middle East and North Africa). In 2007, the seven billionth can of Spam was sold.


Hormel claims that the meaning of the name "is known by only a small circle of former Hormel Foods executives", but popular beliefs are that the name is an abbreviation of "spiced ham", "spare meat", or "shoulders of pork and ham". Another popular explanation is that Spam is an acronym standing for "Specially Processed American Meat" or "Specially Processed Army Meat".

The difficulty of delivering fresh meat to the front during World War II saw Spam become a ubiquitous part of the U.S. soldier's diet. It became variously referred to as "ham that didn't pass its physical", "meatloaf without basic training", and "Special Army Meat". Over 150 million pounds of Spam were purchased by the military before the war's end.

Any questions, comments or suggestions? How about complaints or compliments? Let me know via the comments box below.
Posted by Jim Lesses at 1:27 AM