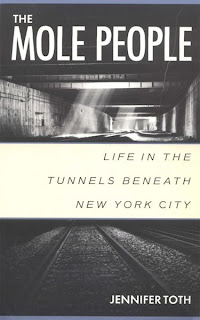 There were many times during my stay in in the spring of 2008, when I stood on a subway platform beneath the streets of , and watched some work detail, or maintenance squad disappear into the dark, dimly lit tunnels of the subway system.

I remember thinking how a tour of that subterranean world would make my stay an even more memorable and fascinating experience than it had already become. So when I saw a copy of Jennifer Toth’s The Mole People at my local resellers of “quality books” – I couldn’t resist picking it up to read and review.

However, The Mole People is not a story about the thousands of maintenance men and women working for the New York City Metropolitan Transit Authority. Instead, the book claims to tell the true story of thousands of ’s homeless who had turned abandoned subway tunnels deep underneath into their homes.

In 1993, Jennifer Toth was a 24 year old intern working for The Los Angeles Times when she began researching and writing The Mole People. I say, ‘claims’ because the book was originally met with some scepticism, and Toth was criticized for her lack of precise details regarding many of the locations mentioned throughout the book. Nonetheless, what is not in doubt or in dispute is the fact that there was then – and still are – homeless people living in abandoned and derelict sections of the labyrinthine subway system.

On , the The Coalition for the Homeless released its tenth annual "State of the Homeless" report, an annual assessment of homelessness in . The report finds that currently more than 36,000 homeless New Yorkers, including 15,500 children, sleep each night in municipal shelters. “Thousands more sleep rough on city streets, in public parks, in the subway system (my emphasis), and in other public spaces.”

Jennifer Toth reported that some of the people she met had been living underground for only a matter of weeks or months, while others said they had been living beneath ’s towering skyline for up to 15 years or more. Some die underground, struck by trains, or electrocuted by the dangerous ‘third rail’. Others die of natural causes or diseases such as AIDS, tuberculosis and pneumonia, and still more die as a result of violent confrontations with other members of the homeless community.

There has been a concerted effort to clean up the subway system in the years since Toth’s book was published, but it is patently clear from the Coalition for the Homeless report mentioned above, that the system is still the shelter of choice for many individuals.

Some live underground simply because they can not afford to pay rent for even the most substandard housing in . Others are on the run from the police, or their abusive parents or (in the case of some teenage tunnel dwellers) from foster parents. Still more suffer from some type of mental illness, or are drug or alcohol addicted. Some stay underground for the freedom it affords them – because they can’t deal with the regimentation associated with staying in emergency accommodation or government run shelters. Despite the hardship they face, some are able to form supportive communities underground, and generally try to look out for each others welfare.

Part melodrama, part exposé; part history, part Gothic horror story; veering between sociological study and classic investigative journalism, Jennifer Toth’s The Mole People is a depressing indictment of modern America, and its inability to help the most vulnerable and most disenfranchised people in the wealthiest country on earth.

But is the book true? I have no doubts that the story Jennifer Toth exposes so graphically, is as accurate as any 24 year journalism intern can hope to make it. In the book Bernard Isaacs, one of the long-term tunnel dwellers, makes the point that the most important truth about underground people is that there is no single truth about them.

“They tell many stories and there is truth in all their stories,” he says. “You just have to find it.”

One can only hope that things have changed dramatically since the book was written in 1993. Sadly, judging by the figures already referred to above in the Coalition for the Homeless report – I wouldn’t count on it.

On Film: I have tried in vain to find the title of, or information about a documentary I saw many years ago (probably back in the 1970s) which showed some of ’s homeless living underground. I clearly remember one scene in which a homeless man barbeques a large rat over an open fire before eating it! And no, it was not Voices In the Tunnels: In Search of the Mole People, the 2008 documentary by Vic David. If you want to view the trailer for Voices in The Tunnels, click here…

Margaret Morton: Scattered throughout The Mole People, are a number of stark, black and white photographs depicting some of the homeless featured in Jennifer Toth’s book. The images were taken by photographer, Margaret Morton. Morton has published several stunning pictorial books documenting the lives of ’s homeless, and these are available for purchase via the 'Reading List' box on the left, or directly from Margaret’s website.

Jennifer Toth Today: Jennifer Toth continues to write books with strong social themes. Her second book, Orphans of the Living (Simon & Schuster, 1997) examined the system of foster care as it existed – and may still exist – in the at the time the book was published.

In 1998, Toth served as the editor of the book, Keeping America's Promise to North Carolina's Children. Unfortunately (at the time of writing this), apart from the title, I haven’t been able to find out any more about the book or its main theme. Just what is “’s promise”, to the children of ?

Finally: More adventurous readers may be inspired by this…

Click image below to purchase The Mole People from Amazon.Com...
Posted by Jim Lesses at 12:53 PM