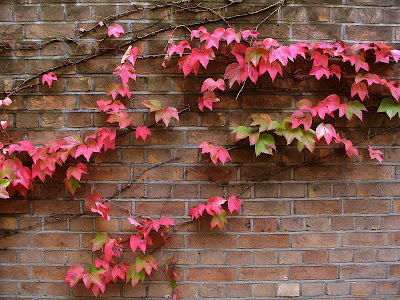 Taken just a few days before I left before my return to in late September 2008. I was attracted by the autumnal colours of this wall creeper in St. Bride’s Passage, near ’s Cathedral.
I am repeatedly attracted to examples of how nature adapts to urban environments and often survives and thrives in the most unlikely places. City workers hurry past views like this and barely give them a second thought – assuming they notice them at all. But for me, it is precisely these splashes of colour (representing nature at its most delightful), that make city living bearable.
It is discoveries like this that make hours of walking busy city streets worth the effort. You never know where the surprises are, or what they might be. And yet they are everywhere, waiting to be discovered by the alert observer.
Location: St. Bride’s Passage, EC4, .
Photograph: by Jim Lesses, .
Note: Click on image to view full sized.
Posted by Jim Lesses at 10:53 AM