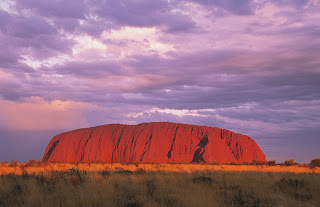 ~ The big Australian travel story of the past 24 hours is a proposal to close the controversial climb to the top of Uluru/Ayers Rock.

‘Controversial’ because the traditional owners of Uluru have been lobbying for this to happen for many years, while tourists, travel industry operators, the government of the Northern Territory (and now the Federal Opposition), have fought against the proposal.

A draft management plan for the was released yesterday, recommending a ban for cultural and environmental reasons.

Currently, tourists visiting Uluru are left to make there own decisions regarding whether or not to climb Uluru. Effectively, they must decide for themselves whether they will ignore the wishes of the traditional Aboriginal owners, or whether they will respect them. Now that choice may be taken out of their hands.

Donald Fraser, a traditional owner of Uluru and a former chairman of the Uluru Kata Tjuta Board of Management has long been disturbed by the sight of people climbing the monolith.

“It's a very sensitive area,” he said in a radio interview. “There's a lot of things involved in climbing. Firstly the danger of people falling down and killing themselves,” Mr. Fraser said. And his concerns are real. More than 35 people have died while climbing Uluru, often in extreme heat. In fact, there is already a ban on climbing the rock whenever the temperature reaches 35C (95F).

Uluru is visited by around 350,000 people a year, about half of whom are from overseas. According to the Government's figures, about 100,000 people climb the 346-metre high rock each year against the wishes of the traditional owners.

However, some operators already ask people on their tours not to climb the rock.

Phil Taylor, a tour operator based in said, “We respect the wishes of the traditional owners, and explain to the people the cultural significance that Uluru has for the Anangu people. As a result of that, our figures show that 95 per cent of the passengers that we carry do not climb the rock,” Mr. Taylor said.

Of course there is a lot more to Uluru than just the chance to climb it.

Many tourists go to Uluru seeking to interact with Indigenous people and to be exposed to their culture. Simply climbing Uluru does not give them that opportunity. In fact, most visitors will never be given the chance to even talk with the traditional owners during their visit to the site.

Traditional owner, Donald Fraser says the idea isn't to drive tourists away, but to give tourists and Indigenous people a richer experience in the park.

“There's a lot of other things for the people to see; walk around and learn culture and everything else in a steady way, not only the climb. We're not hunting the tourists away, we're inviting them to come and learn about us and about our culture,” Mr. Fraser said.

Another traditional owner of Uluru, Vince Forrester, said he was relieved a ban on climbing the iconic rock was one step closer to becoming a reality. He said the rock was sacred to the local Aboriginal people and traditional owners have wanted the climb closed since the park was handed back to them in 1985.

Mr Forrester said tourism operators should not be concerned about the closure. "The visitors will get more information by walking around the base of Uluru and getting told the stories which Aboriginal people are available to do," he said.

Commenting on some of the environmental concerns, the Director of National Parks, Peter Cochrane, said there were concern about erosion, and "…there are no toilets on the top of the rock. So human behaviour up there means that we get run-off fouling water holes, and having impacts on plants and animals and the health of Aboriginal kids who play in those water holes," he said.

Clearly, Mr Cochrane was being very circumspect here. This behaviour is akin to visitors urinating against the ‘Wailing Wall’ in , or defecating in the grounds of the Grand Mosque in .

Given that Uluru is probably the most sacred of all Aboriginal sacred sites, it is hard to know how one could treat their culture with less respect – or offend them more.

The draft management plan, which is open to public comment for the next two months, notes that recent surveys show 98 per cent of people would not be put off visiting the area if they were not allowed to climb the rock. The plan could come into effect within 18 months, but must first go through a consultation process and be signed off by Federal Environment Minister Peter Garrett.

Or you can read more here...

And here… Plan to ban climbers from Uluru…