NYC Day 35: In Which I Go In Search of Woody Guthrie 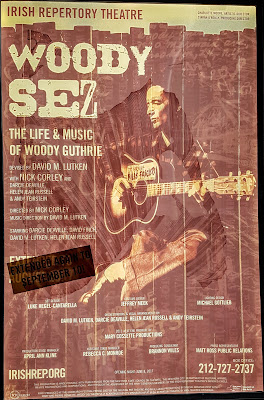 Click on images to view full sized.
...
Utilizing the writings, words, songs and music of America's greatest folk troubadour, Woodrow Wilson Guthrie, or 'Woody' as he was universally known, David M. Lutken and his three fellow actor/musicians bring to the stage the joy, pathos, politics, and tragedy of Guthrie's short and dramatic life. More than three dozen songs are included in the production, some in full and some using just a verse or two to place a scene or episode from Woody's life in context.

In a little over two hours we learn about Woody's childhood, his first steps as a budding musician, the confinement of his mother to a mental institution, and to his 'hobo' years jumping freight trains or hitchhiking around the country singing, writing, and painting, scraping by as best he could. 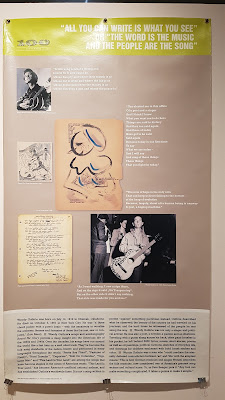 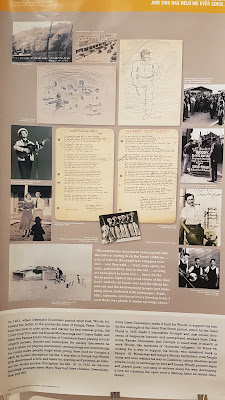 The show was devised by David M. Lutken who channels the ghost of Woody Guthrie throughout the show. A fine singer, talented musician, and blessed with an easy going manner that suits the character he so ably portrays, Mr. Lutken knows his man and his songs 'inside out, upside down, and round and round', as Woody Guthrie might have said himself. The other cast members are Helen Jean Russell (an original member of the 2007 Edinburgh Fringe shows), David Finch, and Darcie Deaville.

All the actors are talented musicians and multi-instrumentalists in their own right, and between them provide all the instrumentation during the show. Among the array of instruments used were several guitars, mandolins, violins, and harmonicas, I also counted an upright bass, Autoharp, dulcimer, Jews harp, spoons, penny whistle, and a banjo. The word talented barely does these four amazing actors and musicians justice. 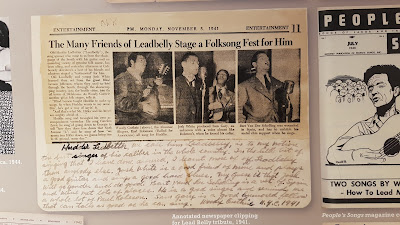 Born in Okemah, Oklahoma in 1912, Woody Guthrie died in October 1967, following a long battle with Huntington's Disease. But before he died he performed with many of the great folk and blues luminaries of the late 1930s and 1940s including Pete Seeger, Sonny Terry and Brownie McGee, Cisco Huston, and the great Huddie Ledbetter, better known as 'Leadbelly'.

Since his death, dozens of contemporary musicians continue to cite Guthrie as an influence and inspiration in their own writing and careers. One of the earliest and most famous of Guthrie's acolytes was Bob Dylan, whose Song To Woody, appeared on his first album. Other contemporary performers who have paid or continue to pay tribute to Guthrie include Bono, Bruce Springsteen, Tom Morello, and of course Billy Bragg who, with the group Wilco, has recorded two albums of previously unrecorded Woody Guthrie songs on the albums Mermaid Avenue (1998), and Mermaid Avenue II (2000). In 2012 Bragg released the Mermaid Avenue Complete Sessions, a box set which included the above two albums plus a third album of previously unreleased material, and the documentary Man In The Sand, which follows major steps in Woody Guthrie's life.

Mermaid Avenue, where Woody Guthrie had a home while living in New York City, is located in Coney Island. Unfortunately the home no longer exists, but I'd like to think that Woody's spirit still likes to stroll along the famous boardwalk, and warm his toes in the sand. 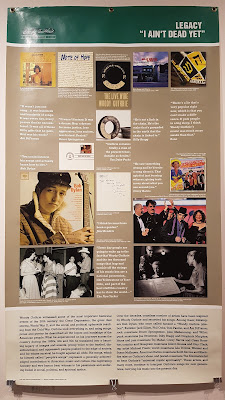 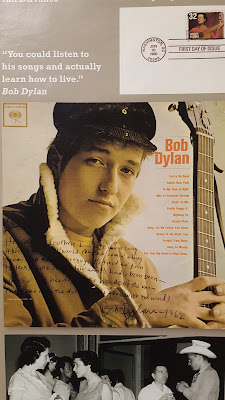 ...
Woody Sez was first performed at the Edinburgh Festival Fringe in 2007, and has since been presented hundreds of times in more than 60 countries. The production at the Irish Repertory Theatre has now been extended twice from its original end date -- first to August 20 and again recently to September 10 -- which is surely a clear recognition that even after ten years, Woody Guthrie's story, words, and songs have much to offer us fifty years after his untimely death.

Running concurrently with the production of Woody Sez at the Irish Repertory Theatre, is a display consisting of a dozen or so large panels outlining key periods in Woody Guthrie's life. Images of some of these panels are used to illustrate this post. 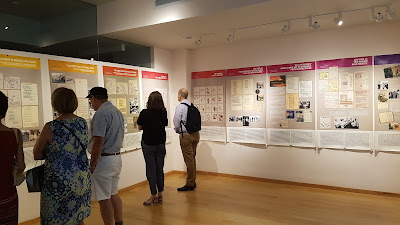 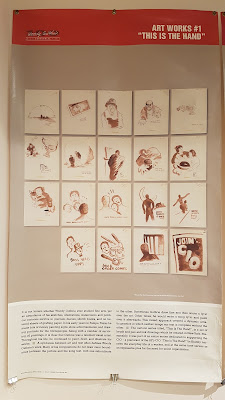