NYC Day 18: In Which I Give Macy's Annual July 4 Fireworks a Miss 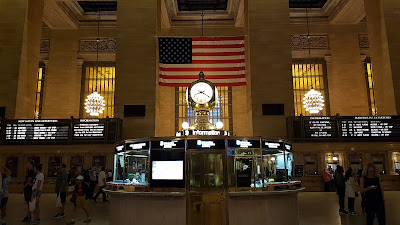 Event of The Day: Macy's July 4th Fireworks (between E 24th and E 42nd streets).
I started the day with the best of intentions. My intention being to check out a few places downtown and then head over to the East River early to get a good viewing spot for the main event of the day: Macy's July 4 Fireworks Spectacular that was due to kick off sometime after 9.30pm. However, after being out and about for a good seven to eight hours, and after alighting from a bus at Fifth Avenue and starting the long walk down 42nd street towards the river, I dropped by the restrooms below Grand Central Terminal for a relief break, and on surfacing once more to street level and seeing the stream of people pouring down the road to the East River, I decided that enough was enough, and caught an M4 bus on Madison Avenue for the return journey to Washington Heights! 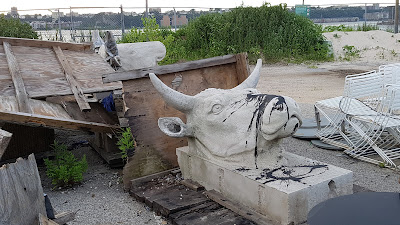 Somewhere along the Hudson River Greenway, a graveyard for discarded architectural remnants. 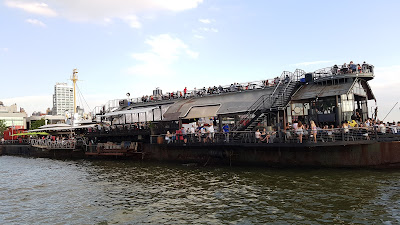 The Fireboat was going off without the need for fireworks of the explosive kind.

I know, I know. You are probably thinking, what is the point of this guy visiting New York City if he doesn't participate in one of the most anticipated events of the year?

The answer, dear reader, or answers, are pretty simple and straightforward, so for what it's worth: I was tired, for one. Secondly, it occurred to me that a sizable portion of the half million people attending the event would be trying to squeeze into every available type of transport for the ride to their homes or hotels, and most of those would be using buses or subways, and the thought of doing this brought to mind sardines packed into hot and sweaty sardine cans. And that's assuming it didn't take an hour or more to find transport that wasn't already packed to the gills (to continue the fish metaphor). No thanks. 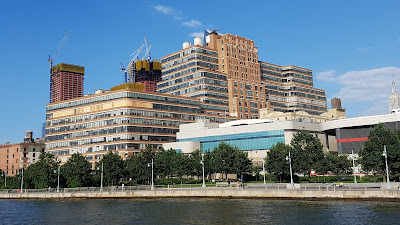 The amazing Starrett-LeHigh Building use to dominate the skyline at this point along the river, but it is about to be eclipsed by the massive developments currently underway at the Hudson Yards site. 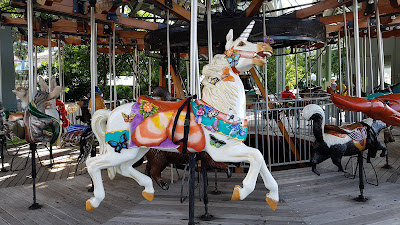 The butterfly unicorn at the Pier 62 Carousel

I approach my 69th year, I have to say I have seen more than my share of fireworks, including a Macy's July 4th event -- which took place during a change of location experiment on the Hudson River in 2010. Yes, it was spectacular and over the top as these events tend to be, but I figured that apart from the change in location back to the East River, the 2017 event probably wasn't going to differ all that much from the 2010 one.

Still, the day did not go to waste. Illustrating this post are a number of photographs from my peregrinations between 14th street and 42nd street, mostly along the Hudson River bordering the Chelsea neighborhood. They include images of Chelsea Market, the High Line (although I left that much acclaimed piece of architecture after only five minutes due to the heat of the day). 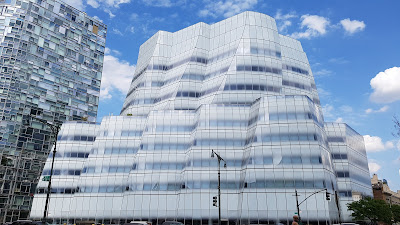 The logo on the door of this stunning piece of modern architecture has just three letters, IAC, which turns out be the home of "...a leading media and Internet company." 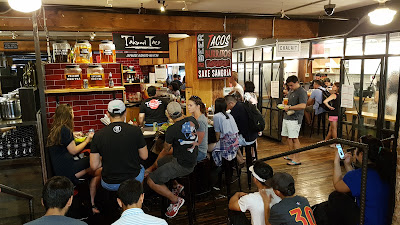 Just a brief glimpse inside Chelsea Market. Apart from the thousands of tourists who flood the place every day, and the New Yorkers who serve them, do any other locals actually visit this complex, I wonder?

Best of all was my meal of the day; a Reuben sandwich with pastrami, and real Australian style hot chips, not those anemic looking fries that most restaurants and fast food chains dish up nowadays. Thanks to the Star On 18 diner on the corner of 10th Avenue and West 18th Street for this surprise treat.

The Reuben sandwich is described online as "...an American hot sandwich composed of corned beef (oops), Swiss cheese, sauerkraut, and Russian dressing, grilled between slices of rye bread." Oh well, I was offered pastrami as well as corned beef and an option and chose the pastrami. 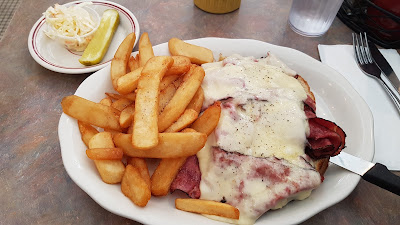 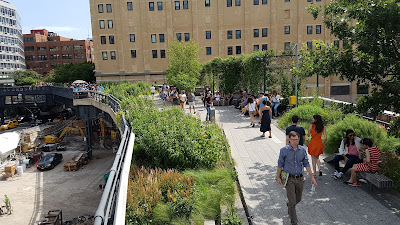 Any questions? Comments? Thoughts? Go on, you know you want to ask them or share them. Drop me a line via the comments box below or via my Twitter handle @jimlesses I won't bite, I promise.
Posted by Jim Lesses at 3:18 AM