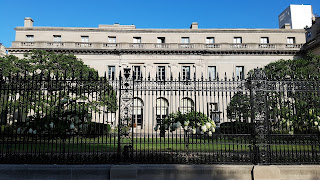 FRICK COLLECTION: PAY WHAT YOU WISH DAY
I made a welcome return to the Frick Collection (at East 70th Street & Fifth Avenue). Every Wednesday the Frick has a pay-what-you-wish policy, and I was happy to pay five dollars instead of the usual $17 Seniors price.

The Frick Collection is housed in the former Gilded Age mansion of Henry Clay Frick, a man who made his money mining coke (no, not that kind of coke!). Frick was an avid collector of art, and left a will that ensured that on his death the mansion and its collection would be turned into a public museum. The building, that is to say, the mansion, has remained almost completely unchanged since it was built, although a courtyard with fountain, and a couple of other rooms have been added to an area that was originally set aside for carriages and the horses that pulled them.

Apart from the rare opportunity to walk through a former Gilded Age mansion, the collection, or at least those works that are on display, can been enjoyed in full in a couple of hours. Along with the permanent collection, the Frick generally has two or three small exhibitions running concurrently

Currently there are three exhibitions taking place at the Frick: 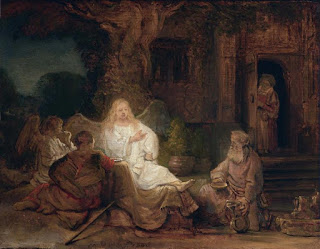 Above: Abraham Entertaining the Angels, by Rembrandt.
...
Divine Encounter: Rembrandt’s Abraham and the Angels
Now through August 20, 2017

On loan from a private collection, Rembrandt's Abraham Entertaining the Angels of 1646 is the centerpiece of a small exhibition dedicated to the artist's depictions of Abraham and his various encounters with God and his angels, as recounted in the book of Genesis. In the painting and in the other works included in the show — a tightly focused selection of prints and drawings and a single copper plate — Rembrandt explored, in different media, the nature of divine presence and the ways it was perceived. 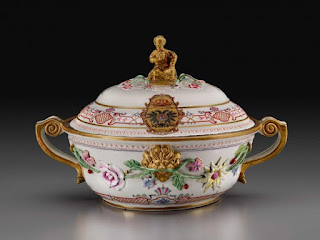 (Image: A colorful porcelain deep covered dish with handles, decorated with flowers  and figurine at top)
...
Fired by Passion: Masterpieces of Du Paquier Porcelain from the Sullivan Collection
Now through August 12, 2018

This installation in the Portico Gallery was inspired by the generous gift of fourteen pieces of Du Paquier porcelain given to the Frick in 2016 by Paul Sullivan and Trustee Melinda Martin Sullivan. Although in operation for only twenty-five years, the Du Paquier manufactory left an impressive body of inventive and often whimsical work, forging a distinct identity in the history of European porcelain production. The exhibition features about forty tureens, drinking vessels, platters, and other objects produced by Du Paquier between 1720 and 1740. 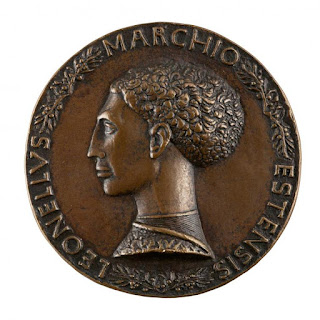 Above and below: both sides of a medal by Pisanello showing portrait bust of Leonello d'Este. 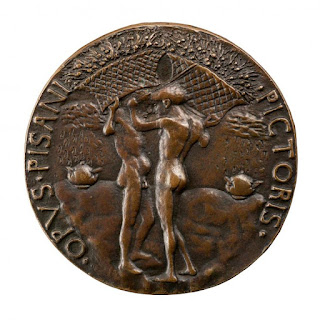 ...
The Pursuit of Immortality: Masterpieces from the Scher Collection of Portrait Medals
Now through September 10, 2017

Celebrating the largest acquisition in the Frick’s history, a gift of approximately 450 portrait medals from the incomparable collection of Stephen K. and Janie Woo Scher, the exhibition explores one of the most important artistic inventions of the Renaissance. The selection showcases superlative examples by masters of the medium — many of whom were also celebrated painters, sculptors, and printmakers — from Pisanello in the Italian Renaissance to Pierre-Jean David d’Angers in nineteenth-century France, honoring medals as integral to the history of portraiture in Western art and as a triumph of sculpture on a small scale.

In the music room/theatre visitors can watch a short film that provides some historical details about Henry Clay Frick and his collection. Currently a second short film examines Rembrandt's Abraham Entertaining the Angels, which packs an enormous amount of detail into a work that is just nine inches wide. 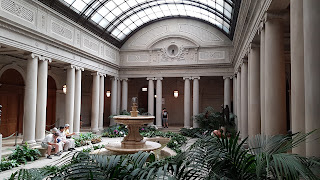 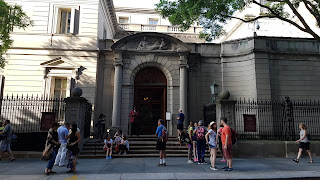