NYC Day 28: In Which I Venture Across the East River to the Brooklyn Museum 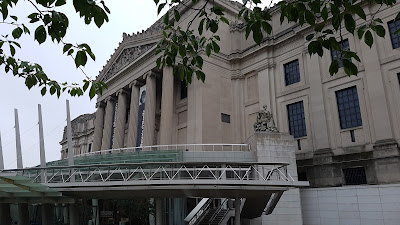 Brooklyn Museum (click on images to view full sized)
...
NEW YORK CITY: LOVE IT, OR LEAVE IT
You have to love New York City, because if you don't you are going to hate it. Take the weather for example. Yesterday had to have been one of the hottest and most humid of the summer so far. The forecast temperature was 93F, but once the oppressive humidity is taken into account -- and yesterday the humidity was oppressive -- the 'feels like' temperature, as they refer to it here -- makes the temperature feel much higher. This awful heat and humidity combination is another good reason not to venture down into the subway system if at all possible (see yesterday's post), since the temperature down there has to be at least ten degrees higher. And it definitely feels like it is 20 degrees hotter.

However, here we are today, and the temperature is at least 20 degrees cooler with a light but steady rain failing over the city, or at least over Manhattan. While the cooler temperature and the rain brings some relief to the city's eight million residents and tens of thousands of visitors, that relief is only temporary. In fact, brief as this respite from the heat will be, the light showers now covering the city's sun baked streets and buildings will only serve to increase the humidity once the water begins to evaporate, and thus the whole cycle of heat, humidity, and rain continues over and over again.

Nevertheless, as I wrote yesterday, Every cloud has a silver lining, and I had no intention of  letting a 20 degree drop in temperature go to waste. Heck, I was even prepared to brave the subway system on the basis that the temperature underground would have reflected to some extent the cooler weather outside, and happily that proved to be the case. It was therefore time to get off the island of Manhattan, and head to Brooklyn. 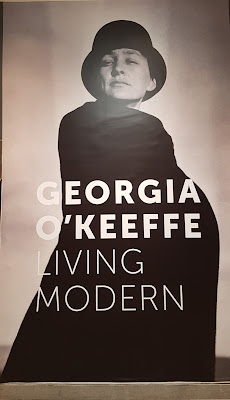 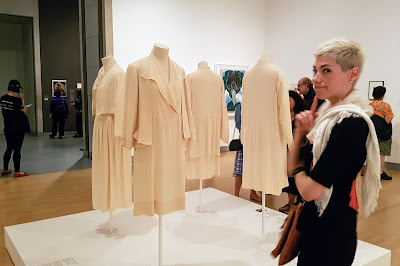 Above and Below: It all seems a bit fetishistic to me, but the exhibition featured numerous examples of clothing taken from Georgia O'Keeffe's wardrobe. 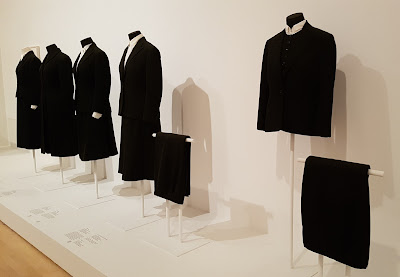 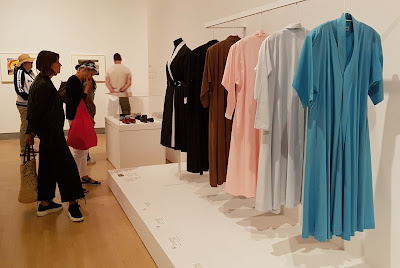 ...
In four previous extended visits to New York, I had never made it to the Brooklyn Museum, and today was the day I chose to change that sorry fact -- and I am delighted I did. Where the Museum of Modern Art and the Metropolitan Museum, and many other similar institutions on Manhattan, are constantly packed with visitors, crowding and jockeying for prime selfie positions, the few people I saw at the Brooklyn Museum were quiet, reserved, and very well behaved.

And while the Brooklyn Museum's collection may not be as extensive as that of say, the Met Museum, there is more than enough to justify a visit to this wonderful location. The lack of crowds also seemed to cause visitors to slow down and savor the collection rather than feel they had to rush through rooms whose walls were crowded with works of art. The pace of discovery was certainly far more relaxed and reflective at the Brooklyn Museum than I have ever found it to be at the Met or MoMA. 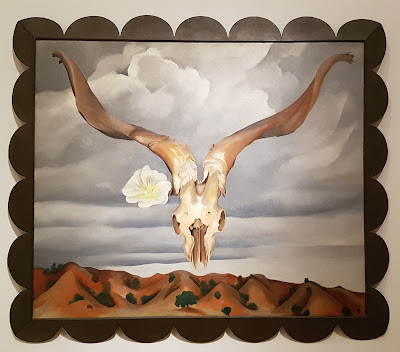 Above and Below: Ram's Head... Full picture, info panel and detail. 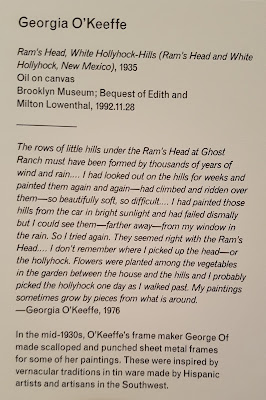 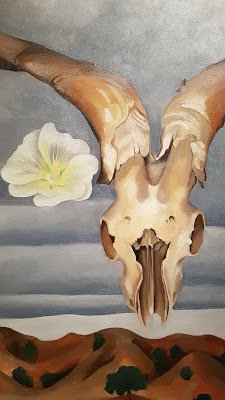 ...
The big show now on at the Brooklyn Museum is the Georgia O'Keeffe: Living Modern exhibition which finishes July 23, 2017, so if you are going to see it, you need to be quick.


Georgia O'Keeffe (1887-1986) is one of the iconic figures in modern American Art, celebrated for her early abstractions, and paintings of flowers and animal bones. Yet even though her paintings are familiar classics of twentieth-century Art, and the circumstances of her life are well known, there is still much to discover about how she created her identity beyond the studio.

This exhibition takes a new look at how O'Keeffe integrated the modernity of her art and her life, exploring how she used clothing and the way she posed for the camera to shape her public persona. Though she dressed for personal comfort and ease, her wardrobe played a meaningful role in her aesthetic universe; she understood how clothes helped create and reinforce her image as an independent woman and artist. 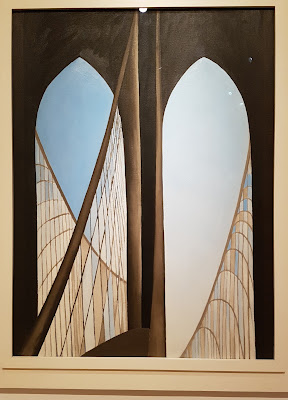 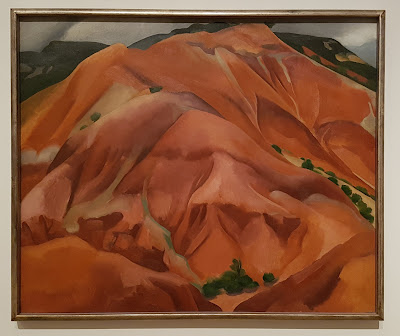 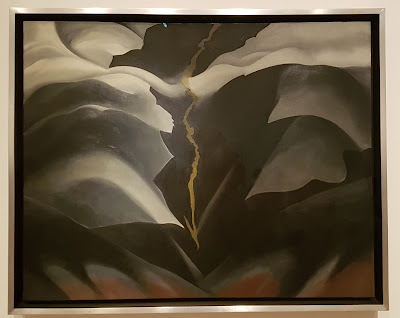 Rejecting the staid Victorian world into which she was born, O'Keeffe absorbed the progressive principles of the Arts and Crafts Movement, which promoted the idea that everything a person made or chose to live with--art, clothing, home decor--should reflect a unified and visually pleasing aesthetic. Even the smallest acts of daily life, she liked to say, should be done beautifully, a philosophy reinforced by her study and appreciation for the arts and cultures of Japan and China. {Source: Exhibition brochure]

I enjoyed the exhibition as far as it went, but I would have liked to have seen more paintings and fewer photographs, of which there were many, and all of which seemed to feature O'Keeffe sporting her signature black and white ensembles. She certainly knew what her 'brand' was, and she rarely deviated from it throughout her professional life.

O'Keeffe is surely best known for her 1920s and '30s paintings that feature either the sun dried skulls of dead cattle, or the large, detailed images of flowers (and sometimes both themes combined together in unusual ways). Over the years that I have been familiar with her work, I have been happy to accept the idea that many of these paintings had other symbolic meanings, most of which had to do with sex and sexuality.

So it was informative to read that these theories had been promoted by Alfred Stieglitz (O'Keeffe's longtime friend, partner and husband). Stieglitz ...


...interpreted her art as having strong sexual and anatomical connotations, claiming her images were expressions of an essential and uniquely feminine artistic sensibility. O'Keeffe spent years denying these eroticized readings of her painting as well as the qualification of her identity as an artist with the word woman. In an interview in the 1960s, she offered a different account of how she came to paint her big flowers:

In the twenties, huge buildings seemed to be going up overnight in New York. At that time I saw a painting by Fantin-Lator, a still life of flowers I found very beautiful, but I realized were I to paint the flowers so small, no one would look at them because I was unknown. so I thought I'll make them look big like the huge buildings going up. People will be startled; they'll have to look at them -- and they did. 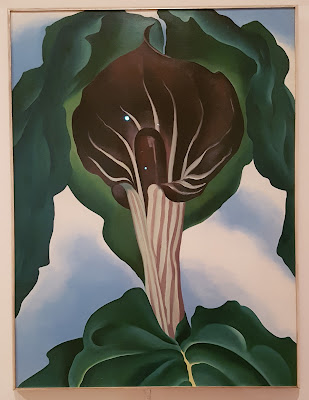 Personally, I'm happy to accept O'Keeffe's explanation at face value, However, the subconscious mind is an amazing thing, and maybe it's a reflection of my own subconscious that I too can see the same things that Alfred Stieglitz saw in her work. Or maybe I just spend too much time thinking about the female anatomy in general! I suspect too, that Sigmund Freud would have been very interested in exploring O'Keeffe's subconscious on seeing these same works.

Note: The museum brochure clearly states the hours noted above. However, I was there on a Friday when the museum was open until 8:00pm, though I suspect this may be for the summer months only. Note too, that the museum offers free admission to all on the first Saturday of each month. See you there ;-) 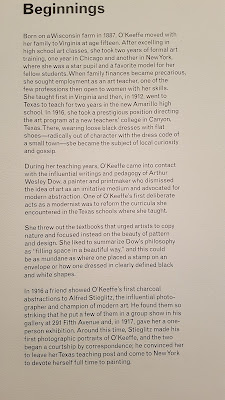 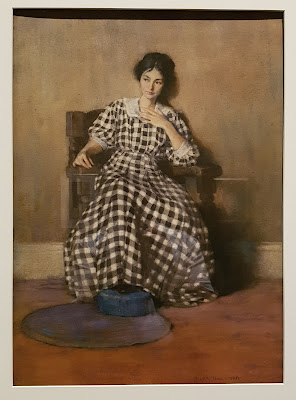 Above and Below: Hilda Belcher's portrait of a young Georgia O'Keeffe, and info panel. 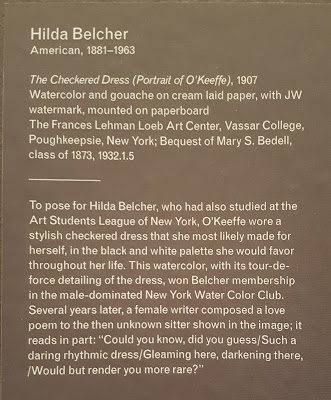 Any questions or suggestions? How about complaints or compliments? Let me know via the comments box below.
Posted by Jim Lesses at 9:45 AM