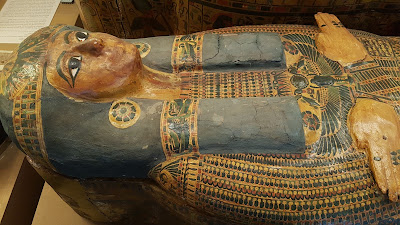 This and the images below: Cover and internal decorations of Egyptian burial casket.
It is hard to believe that these artifacts are thousands of years old given the quality of
material and the vibrant colors that are still visible. 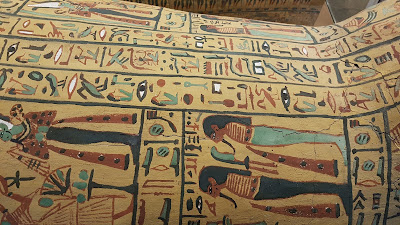 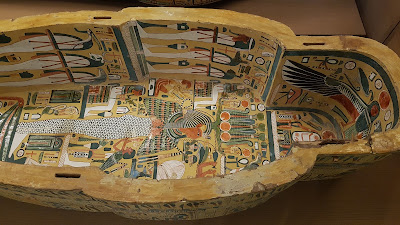 
In 2005, Mark Johnson was walking in Santa Monica, California, when he heard the voice of Roger Ridley (now deceased) singing "Stand By Me." Roger had so much soul and conviction in his voice, and Mark approached him about performing "Stand By Me" as a Song Around The World. Roger agreed, and when Mark returned with recording equipment and cameras he asked Roger, "With a voice like yours, why are you singing on the streets?" Roger replied, "Man I’m in the Joy business, I come out to be with the people." Ever since that day, the Playing For Change crew has traveled the world recording and filming musicians, creating Songs Around The World, and building a global family. [ Source: Wikipedia]

From such humble beginnings has the Playing For Change Band grown. On this night it consisted of 12 musicians and singers, including the very popular Grandpa Elliott, who appeared in the first video for the song, Stand By Me, and who had not performed with the band for the past year or two.
It's also worth noting that PFC also created a separate non-profit organization called the Playing For Change Foundation, which builds music schools for children around the world. Truly it is said: From little things big things grow. As anticipated, it was a great night of music delivered by musicians from as far afield as South Africa, Israel, Japan, North and South America and elsewhere. The mood was upbeat and joyous throughout, and the show capped of a busy week of gigs for me that made my second week in New York hard to beat.
Posted by Jim Lesses at 6:59 AM