One Ring To Scam Us All 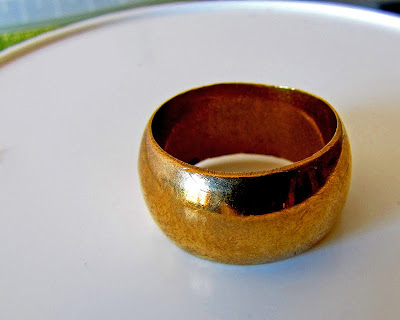 Image: Exhibit A: The One Ring to scam us all…

One of the lessons of international travel is learning to be aware of – and deal with – the hundreds of potential scams and scammers waiting to con visitors and locals alike of their hard earned cash. had scammers and con artists aplenty, and while I managed to avoid most of them, I have to admit I did get caught out by one particular scam. So in the interests of public education, and at risk of opening myself up to public ridicule, I have decided to outline the scam here.

I was walking through Place de la Concorde one day, when a pretty young thing suddenly approached me and showed me a large ‘gold’ ring (see image above), and ask in broken English if I had inadvertently dropped it in the snow. Of course I had not, and I told her so.

Since the ring had quite a large diameter, and could easily pass as a man’s ring, she insisted I take the ring, saying magnanimously that it was my “Lucky day”, as she had no use for such a large object. I tried to tell her that I didn’t want or need it, and that she should keep it for herself, but she insisted.

Somewhere in the back of my mind warning bells were ringing, but she was such a pretty young thing that I finally I thanked her and took the ring. And therefore – the bait!

I turned and started walking away, and no sooner had I gone half a dozen steps when suddenly, there she was again. Since it clearly was my ‘lucky day’, she said, could I return the favour and give her a little money in return for the ring?

Still holding the ring in my hand, I offered to give it back to her, but there was no way she would take it. She was more than happy for me to keep it, but asked again if I would be so kind as to offer her something in return. Of course, by now I knew I had been scammed and could have simply walked off with the ring, or simply dropped it in the snow and left her to pick it up. But I didn’t.

Now this may sound like a stupid thing to say, and looking at it on ‘paper’ it does seem completely illogical. But. I figured I had been caught out by my own gullibility and stupidity, and for that, she at least deserved to get something for her efforts, and for the lesson she taught me – which of course, is to not be so gullible and stupid.

I think in the end I ‘paid’ four euros for the useless ‘gold’ ring and I still carry it to remind me to be more aware the next time some pretty young thing approaches me and offers to give me something for nothing!

Postscript: Over the next day or so, I was approached by at least two other (much older) women trying to work the same scam on me. Eventually I got my revenge. Again, I happened to be walking near Place de la Concorde, and noticed one of those women working the scam on a young couple. I approached the group and said something to the effect of, “Ah, how about that. You’ve got one of these as well,” and showed them my gold ring, which was exactly the same as the one the elderly lady was trying to foist onto the couple. As it happens, they had in fact already given the woman some money, but as soon as they realized they had been conned, they took their money back and left the woman holding her useless gold ring.

As the young couple walked off I tut-tutted a few times, and wagged a finger in the old ducks face. The saying: If looks could kill… comes to mind here, and feeling quite smug and just a little self-satisfied with myself, I walked off, leaving the woman to curse her bad luck.