In Review: For Liberty and Glory 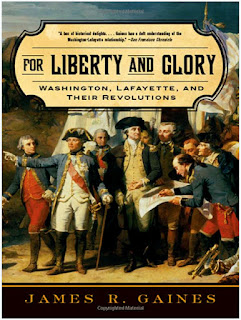 Over the past year or two, I have rekindled my interest in history and some of the greatest events of the past several hundred years.

Because of my two extended visits to I have been particularly interested in the early history of the , and have read numerous books charting the birth and development of that nation, and have many others I hope to read as time allows.

For Liberty and Glory: Washington, Lafayette, and Their Revolutions by James R. Gaines deals with two of the most important revolutionary periods in American and French history, and the two principal players in both those revolutions.

Across 500 pages Gaines traces the parallel paths of George Washington, the first President of the newly formed , and the Marquis de Lafayette, the man who could have been the first president of the , but who refused the position.

Although I was familiar with some American place names bearing the name and , and had walked along

Lafayette Street
in on numerous occasions, I must admit to being completely ignorant of the Marquis de Lafayette, and the role he played in both the American and French revolutions.

I don’t know if every American city or town bearing the name Fayette, , and owe their title to the Marquis de Lafayette, but it is entirely possible. Certainly,  innumerable streets, avenues, French and American naval vessels, educational institutions, US counties, subway stations, parks and city squares, and other landmarks do owe their names to him.

Lafayette, whose full name was the jaw breaking, Marie-Joseph Paul Yves Roch Gilbert du Motier, Marquis de La Fayette (and who shall, for the sake of brevity, hereafter be referred to mostly as Lafayette), was a French aristocrat and military officer, who at the age of just 19 years sailed to the New World to join the American Revolutionary War against France’s age-old enemy, Britain. In the process he became one of George Washington’s closest aides and confidante’s and one the American revolution’s most well-known, and well regarded generals.

Amazon reader review:
“For those who know much about but less about , I cannot recommend this story highly enough. Touching [and] at times, poignant, it is not only informative but is indeed a joy to read.” ~ Deborah C. Galiano (Picayune, MS)

, himself was wounded at the Battle of Brandywine in , not long after his arrival in , and played a major role in several other important battles. He was also in charge of French troops during the final battle of the war, which saw the defeat and surrender of Lord Cornwallis at in 1781.

Having read virtually nothing about either the French or the American revolutions, I didn’t realize – until reading For Liberty and Glory just how indebted the fledgling American nation was for the support of the French. Successive French kings helped bankroll the American revolution, and hundreds of French officers and thousands of soldiers and sailors took part in some of the most crucial battles of the American Revolutionary War.

Ironically, French participation in the American Revolutionary War helped sow the seeds for the French Revolution which saw the overthrow of King Louis XVI (16th), in October 1789. The royal treasury had borrowed millions of livres (the French currency at the time), and was heavily indebt as a result. The only recourse the court at had to repay its massive debt was to raise taxes and prices on essential foods like bread, which only helped fuel the call for the overthrow of the King.

Compounding the royal court’s problems, were the hundreds of French officers and thousands of French troops and sailors returning from America, most of whom were infused with the idea of, and support for a French Republic. And none was more committed to this cause than the Marquis de Lafayette.

Amazon reader review:
“… this book is one of the better ones on the American Revolution that I've read in recent years, and it's very well done. I would recommend it to anyone even slightly interested in the subject.” ~ David W. Nicholas ()

James R. Gaines is a wonderful storyteller, and skillfully weaves together the major players on these two revolutionary stages. No stone appears to be left unturned, no letter unread, and no intrigue left unexamined. The highs and lows of both revolutions are examined in great detail, and again I learned much about the French revolution that had previously been unknown to me.

I knew about the fall of the Bastille, the tumbrel laden carts filled with hapless Frenchmen and women on their way to the guillotine, and the eventual death by guillotine of Louis XVI and Marie Antoinette. But I didn’t realize just how widespread and horrifying the bloodshed became, as the various forces battled for the control of . I knew next to nothing about the Reign of Terror (1793-1794) unleashed by Robespierre, which according to archival records show that over 16,500 people died under the guillotine, although some historians note that as many as 40,000 accused prisoners may have been summarily executed without trial or died awaiting trial.

In the end Robespierre himself went to the guillotine in 1794, but that didn’t end the slaughter in until the French Revolution finally came to an end five years later in 1795.

There is so much to recommend For and Glory: , , and Their Revolutions by James R. Gaines. In deed, I am now looking for a good book or two about the French Revolution in particular, since I am sure there is much more to learn about that period in French history.

Amazon reader review:
“Gaines' book is a highly readable, insightful and incredibly interesting look at the American and French Revolutions through the lives of Washington and Lafayette.” ~ B. Calhoun ()

Click here to purchase For Liberty And Glory: Washington, Lafeyette, and Their Revolutions...

from Amazon.Com.
Posted by Jim Lesses at 7:08 PM