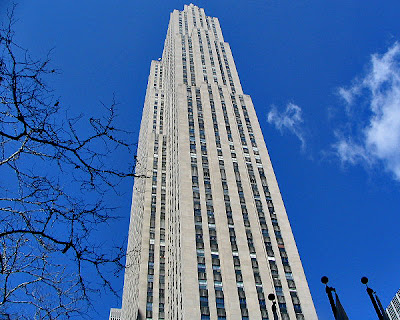 Image: The ,
…
It’s pretty much impossible to miss the in . Located in midtown , the complex consists of 19 major buildings, the largest of which is the GE Building. Directly in front of this building is a large sunken outdoor plaza which doubles as an ice skating rink in winter and restaurant during the summer months.

During my spring 2008 visit to New York I often found myself in the vicinity of the Rockefeller Center and enjoyed passing the time admiring the skaters, people watching in general, and stopping for something to eat at one of the many restaurants and cafés in the underground concourse beneath the GE building. For some reason I rarely went to the Center during my 2010 trip to . Maybe it was because I had seen enough of the site previously to feel happy to overlook the area in favour of ’s many other interesting locations.

Rockefeller Center, or Rockefeller Plaza covers an area encompassing 22 acres (89,000 m2), the borders of which are 48th and 51st streets, and Fifth Avenue to the east, and Sixth Avenue to the west (see map). It was declared a National Historic Landmark in 1987.
…

View Larger Map
…
was named after John D. Rockefeller, Jr., the only son of his namesake and father, John D. Rockefeller Sr. the wealthy oil magnate. Rockefeller Jr., initially planned a syndicate to build an opera house for the Metropolitan Opera on the site, but changed his mind after the stock market crash of 1929 and the withdrawal of the Metropolitan from the project. Faced with the choice of abandoning the project completely or building and financing the Center himself, Rockefeller Jr., chose to build, turning the construction project into the largest private building project ever undertaken in modern history.

Of course, apart from ice skating and people watching and eating, one of the other reasons visitors flock to Rockefeller Center is to take the elevator rides to the ‘Top of The Rock’ as the visit to the observation decks is called. The views from the 70th floor are quite spectacular, as you might imagine, and you have the added advantage of getting great views (and photographs) of the which is near by.
… 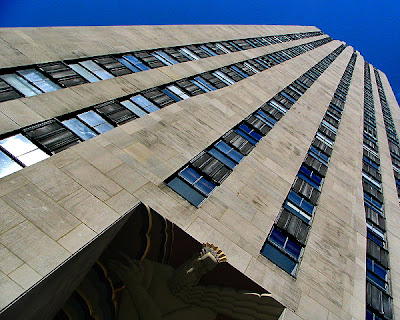 Image: Looking straight up at ’30 Rock’
…
Unlike most other Art Deco towers built during the 1930s, the GE Building was constructed as a slab with a flat roof. This is where the Center's observation deck, the Top of the Rock is located.

In 2005, the Center’s owner completed a $75 million makeover of the observation area which now spans the 67th-70th floors and includes a multimedia exhibition exploring the history of the Center. On the 70th floor, there is a 20-foot (6.1 m) wide viewing area, allowing visitors an unobstructed 360-degree panoramic view of .

Here is a minute or so of video footage I shot during my Top Of The Rock visit during March 2008.
…
…
Getting There:
The nearest subway station is the 47-50th St - Rockefeller Ctr. Station which can be reached by the B, D, F, and M trains (more info: http://www.mta.info/).