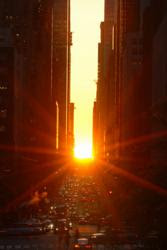 Manhattanhenge – sometimes referred to as the Manhattan Solstice – is a semi-annual occurrence in which the setting sun aligns with the east–west streets of the main street grid in Manhattan, New York City.

The term, as you might have already worked out, is derived from Stonehenge, the prehistoric monument located in the English county of Wiltshire.

Manhattanhenge was popularized in 2002 by Neil deGrasse Tyson, an astrophysicist at the American Museum of Natural History. During Manhattanhenge, an observer on one of the gridded east-west streets will see the sun setting over New Jersey directly opposite from the street, along its centerline.

The dates of Manhattanhenge are usually around May 28 and July 12 or July 13 – spaced evenly around Summer Solstice. In 2011, Manhattanhenge occurred on May 31 at 8:17 p.m., and will occur again on July 11 at 8:25 p.m. The two corresponding mornings of sunrise right on the center lines of the Manhattan grid are approximately December 5 and January 8 – spaced evenly around Winter Solstice. As with the solstices and equinoxes, the dates vary somewhat from year to year.

Manhattanhenge in Popular Culture
Not surprisingly, the Manhattanhenge phenomenon has made it into popular culture, with the event appearing in an episode of CSI: NY that aired on November 25, 2009. Also, the closing scene from the 2010 film Morning Glory features Mike Pomeroy (Harrison Ford), and Becky Fuller (Rachel McAdams), walking off into the Manhattanhenge sunset.

Here’s a very brief 16 second time-lapse YouTube video of the Manhattanhenge event from 2008.

...
...
The same phenomenon occurs in other cities with a uniform street grid. In Chicago, Illinois, for instance, the setting sun lines up with the grid system on September 25, a phenomenon known similarly as Chicagohenge. In Toronto, Ontario, Canada, the setting sun lines up with the east–west streets on October 25 and February 16, a phenomenon known locally as Torontohenge.
If any reader knows of similar phenomena happening around the world, please let us know via the Comments section below.