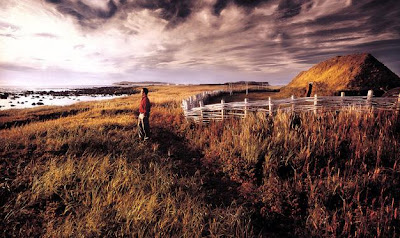 Canada has fifteen national treasures that the world has officially recognized—and plenty of others. UNESCO, the United Nations Educational, Scientific and Cultural Organization, has named 15 Canadian national treasures World Heritage Sites. Personally, I haven’t seen any of them, and I’m probably never going to see more than one or two if I’m lucky. However, you may have more money, or more luck than me so for the record, here is the list. What are you waiting for? Get crackin’!

At SGang Gwaay, an island in the southern portion of Haida Gwaii (formerly the Queen Charlotte Islands) in British Columbia, you can still walk among the remains of the Haida First Nations cedar longhouses and carved mortuary poles crumbling under hairdos of day-glo green moss.

Head-Smashed-In Buffalo Jump, Alberta, is aptly named. It’s the place where, as far back as 5,500 years ago, Aboriginal peoples chased herds of bison over a cliff, killing the animals so they could use the buffalo meat, dried skins, hair and other parts for their survival.

If you are after a more urban experience, the Historic District of Old Québec is a 400-year-old portion of Québec City, QC, bursting with European flair.

In Old Town Lunenburg, Nova Scotia (a British colonial settlement, established in 1753), the colourful wooden houses and buildings have been well-preserved or restored by past and present residents of the town.

L’Anse aux Meadows National Historic Site, situated on a northern point of the island of Newfoundland, uncovers the remains of an 11th-century Viking settlement, the earliest known European steps and establishment in the New World. 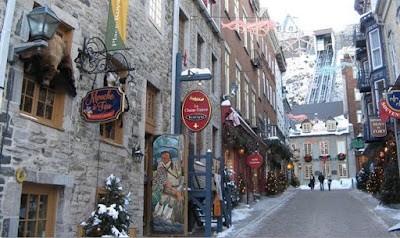 ...
There are 10 more Canadian World Heritage Sites, including:
Click links below to see video footage on YouTube of some of Canada’s great attractions:

More Information: www.travelmanitoba.com
Article courtesy of the Canadian Tourism Commission. Text has been modified from the original.