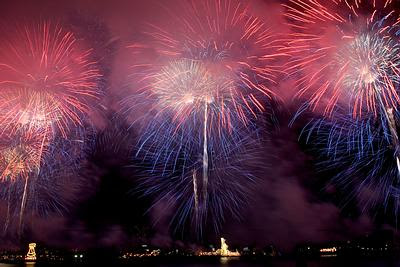 ...
Today is July 4th, Independence Day in America. So happy birthday, America. I’m sure you will celebrate in your usual style: with patriotic speeches, flag-waving, unbridled commerce, and of course, lots of fireworks.

2011 marks the 35th year that the Macy’s department store will be staging their famous fireworks display in New York City, and the spectacular demonstration of pyrotechnics will also celebrate the 125th anniversary of the Statue of Liberty, as well as the nation’s 235th birthday party.

Undoubtedly the country’s largest fireworks display, vantage points along the Hudson River between 23rd and 59th streets will be at a premium when more than 3 million New Yorkers and visitors, pack the area before the first of more than 40,000 fireworks rises into the night sky. Meanwhile, millions more will be watching the event on television.


Last year, at this time, I was making my way to a vantage point along the Hudson River to see my first Macy’s July 4th fireworks display. I had great expectations for this famous event, having read and heard about it from time to time over a period of many years.
Unfortunately, when it finally came and went, I couldn’t help feeling that the actual event was something of an anticlimax to the hours of waiting in stifling heat and long lines that snaked their way to the too few Port-a-loos, hot dog carts, and drink vendors.

Maybe I am hard to please, but I don’t think so. Having arrived at the park along the West Side Highway during the afternoon, I expected to find an exciting program of music and family friendly events scheduled throughout the day. After all, what are three million people supposed to do before the first rocket blasts into the darkness at 9:00PM?

The answer, it seemed, was – not much.

As the minutes ticked into hours, and a hot, humid day turned into a test of endurance – especially for those who had arrived early – there was not a lot revellers could do but conserve their energy, eat overpriced junk food, drink lots of water, and wait.

At some point during the afternoon the crowd was woken from its torpor to the sight and sounds of a military flyover featuring a number of air force fighters that followed the path of the Hudson River up the length of Manhattan before returning down the river and disappearing into the blue haze.

That, if you didn’t include the occasional police helicopter passing overhead, was pretty much the extent of the afternoons entertainment. That, and a New York City fire department boat spraying jets of water high into the air as dusk fell, which, to be honest, was probably the highlight of the day for me. 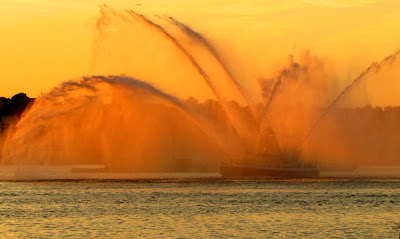 Apparently, again this year, “Revelers along the viewing areas will enjoy a FDNY Fireboat Water Show and a military flyover of four F-15's from the Air National Guard's 104th Fighter Wing.”

The theme for the event in 2011 is Gift of Freedom, and in addition to saluting the lady in the harbor, Macy's will also commemorate the 10th anniversary of the attacks on September 11, 2001 with a tribute in light during a soaring rendition of Amazing Grace. All in all, it is bound to be an exciting, spectacular and emotional finish to America’s birthday celebrations.

Having arrived in New York City just days before July 4, I was keen to experience this national holiday in the company of millions of New Yorkers and fellow visitors, and I’m glad I made the effort despite the heat and the hours of waiting. However, this is one event I am more than happy to cross off my bucket list in favour of any number of other choices available to the visitor in New York City on Independence Day.

Be that as it may: Happy 235th Birthday, America. I hope you have a great day.