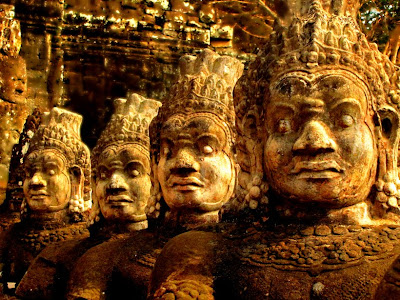 ...
Angkor Thom (literally, "Great City"), is located in Cambodia, and was the last and most enduring capital city of the Khmer empire. Established in the late twelfth century by king Jayavarman VII, it covers an area of nine square kilometres.

I visited Angkor Thom during my month long stay in Cambodia during February 2011, and was left overwhelmed by the scale and beauty of this great complex. Like the other stunning temples around Siem Reap – Angkor Wat being probably the most famous – Angkor Thom has suffered from weathering, wars, and from the stupidity and vandalism of the Khmer Rouge during their murderous reign. 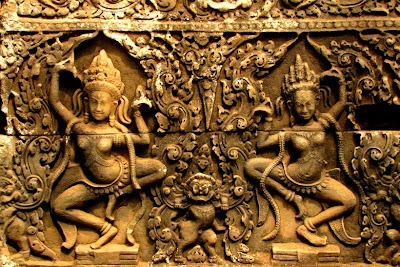 ...
Thankfully though, much remains to be admired (and photographed), by the hordes of visitors that swarm over the great temple sites and ancient cities of Cambodia.

Most of the great Angkor ruins have vast displays of bas-relief depicting the various gods, goddesses, and other-worldly beings from the mythological stories and epic poems of ancient Hinduism (modified by centuries of Buddhism). Mingled with these images are actual known animals, like elephants, snakes, fish, and monkeys, in addition to dragon-like creatures that look like the stylized, elongated serpents (with feet and claws) found in Chinese art. [Source: Wikipedia…] 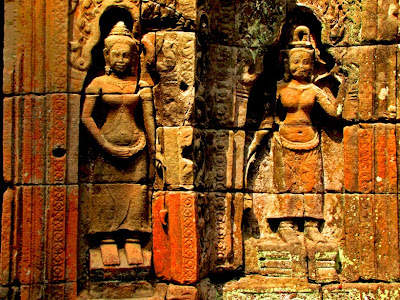 ...
One can only marvel at the size and scope of the thousands of bas reliefs carved into the laterite from which the buildings of Angkor Thom are constructed. How many artisans and sculptors worked – though slaved may be a better word – for how many years to build, carve and shape these ancient cities and temples? And in an age when the average life expectancy of most Khmer people would have been less than 50 years, how many spent their whole working lives on these monumental construction projects – living, working and dying within the shadows of these buildings?

Definitely, worth a visit, and should be in the Top 10 of any travellers ‘bucket list’.

Angkor Thom in popular culture
The film Lara Croft: Tomb Raider features several characters visiting Angkor Thom during their trip to Cambodia to recover the first piece of the Triangle of Light.

-o0o-
Click on each image to purchase or view excerpts from the books displayed below via Amazon.Com...