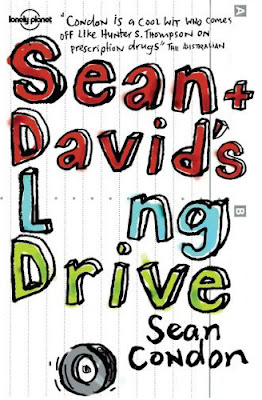 Sean Condon is a master of the quick quip, an eye-catching headline, and a connoisseur of the finest pomades*. As a young copywriter in an unnamed Australian advertising agency, Sean was bored, disillusioned, and desperate for a change in his environment, and his life. His answer? To undertake a long drive around Australia with his mate David O’Brien.
The result of their 6-7 week odyssey is what constitutes Sean + David’s Long Drive (Lonely Planet Publications, 1996. Republished 2009). In fact, the book is essentially a reproduction of the daily diary Sean kept throughout the trip.

To be precise, their trip didn’t take them around Australia per se, but through the centre of the continent. Roughly, the route they followed went thus (see map): [E]Melbourne to Adelaide (via the Great Ocean Road), then Alice Springs, Uluru (Ayers Rock), Tennant Creek, [B]Darwin, Tennant Creek (again), Mount Isa, Townsville, [C]Cairns, Townsville (again), then down the east coast of Australia taking in Surfers Paradise, Brisbane, [D]Sydney, Canberra, and finally back to [E]Melbourne. Whew! If that seems like a long way – it is. Over eleven thousand kilometres in fact.

Incredibly, Sean Condon didn’t drive even one kilometre of that total distance. It seems he doesn’t drive (or at least he didn’t at the time he and David undertook their journey), which meant that David O’Brien had to drive every one of those eleven thousand plus kilometres.

Sean Condon is a graduate of the Bill Bryson School of Travel Writing. (Actually, I just made that up. To my knowledge there is no actual BBSoTW, but if there was, Sean would surely have been a graduate of the Class of ‘96).

Sean, like Bryson has an acerbic wit, a talent for focusing on the odd, the banal, and the ridiculous as they travel across continents, and a talent too for writing about them with humor and occasionally something bordering on compassion and empathy. 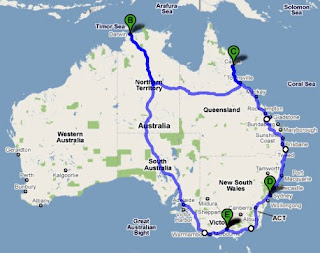 Condon, I guess would be labelled a Generation X-er (he was born in 1965), and presumably he reflects the thinking – and lives the lifestyle – of that generation of thirty-something’s that are lumped within that catch-all label. Sean and David spend much of their down time (when not actually on the road), boozing, smoking, eating junk food, womanising, and boozing some more.

Come to think of it, they spend much of their driving time indulging in the same practices as well.

The book is not a travelogue in the usual sense of the word. If you are looking for specific information and advice about say, Alice Springs, or Darwin, or Charters Towers, you are only going to get the briefest glimpse from Sean + David’s Long Drive. A peak behind the curtain, so to speak. Partly this is because Australia – especially the interior, or ‘outback’ – is so vast, flat, and featureless, that the landscape seemingly never changes for hundreds of miles.

To break the monotony and boredom of the trip, Sean and David engage in small talk – lots of it – that covers their favourite music and bands, women they have known, and television shows that Gen X-ers grew up on. Shows such as the Brady Bunch, Scooby Doo, and other such fare.

I don’t think I learned anything new about Australia that I didn’t already know, and I learned a lot about Sean that I didn’t need to know. While the book is entertaining enough and easily digested, Sean’s humor and jaundiced view of the journey began to grate on me after a while, and it was all I could do to finish the book. Having said that, I must admit that Bill Bryson’s writing can have the same effect on me, so maybe the problem lies with me, and not with Sean Condon – or Bill Bryson.

I suppose that’s a roundabout way of saying, if you like Bill Bryson’s writing, you will like Sean + David’s Long Drive as well.

-o0o-
*Pomade
— n
1. a perfumed oil or ointment put on the hair, as to make it smooth and shiny
[http://dictionary.reference.com/browse/Pomade]

-o0o-
Purchase Sean + David's Long Drive from Amazon.Com as well as other books written by Sean Condon via the links below.