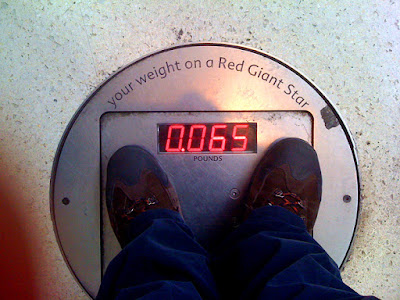 Yes, folks, this would have been my weight if I was dancing about on a giant red star somewhere out in the far flung galaxies. I guess I would have to add a few pounds for the space suit I would need to wear, but hey, I think I should be able to bear the load of a few extra pounds without too much trouble, don’t you think? Especially, given that my current earth weight is around 232 pounds.

“Where can I find this magical scale?” I hear you ask. The answer is in the American Museum of Natural History in New York City. To be more precise, you will find a range of similar scales fixed into the floor of the Cullman Hall of The Universe, in the Rose Center. Here’s what the website offers by way of an explanation:

Visitors can step on several digital scales located in different areas of the Hall of the Universe and discover their weight on Saturn, Jupiter, a neutron star, and the Sun, among other celestial bodies. Your lunar weight can be found on the first level beside a model of the Moon. [Source: AMNH website…]

Suggested General Admission, which supports the Museum's scientific and educational endeavors, includes admission to all 45 Museum halls and the Rose Center for Earth and Space. Should you wish to pay less than the suggested admission, you may do so by purchasing tickets at any admissions desk at the Museum.

Oddly, purchasing tickets online incurs a service charge of $4 per ticket! You'd think it would be cheaper, but I assume the ticketing agency is adding their fees to the process. It hardly seems worth it. On the other hand, if ticket holders are able to avoid the queues, maybe paying an extra four bucks is good value.