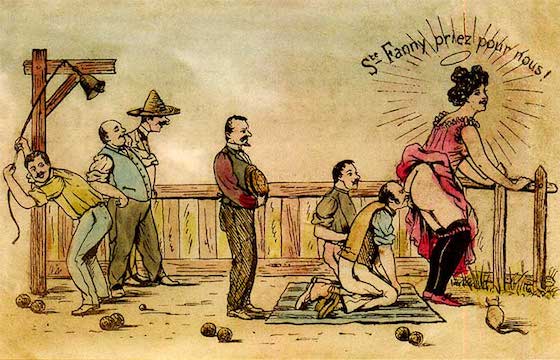 Say, What? The Art of Kissing Fanny!
One of my favourite blogs is the very eclectic Messy Nessy Chic. Vanessa, or ’Nessy’ as she refers to herself, is a young expat English woman now living in Paris. I don’t know how she does it, but her blog has one of the most interesting collections of stories and posts that I have ever encountered in my many years of trawling across the Internet. Every visit reveals a new gem that is sure to enlighten, amuse and entertain the reader.

A recent post; The Art of Kissing Fanny has to be read to be believed. It just goes to prove that there is a story behind everything—no matter how arcane or obscure.

There’s a curious expression used in Provence by pétanque players. “Embrasser Fanny” or to “kiss Fanny”, is a small recompense for making a fool of oneself to put it simply. But where does this mischievous phrase originate from? Fanny was a waitress at a local café in the Savoie region or Lyon– no one seems to agree. Watching the men playing pétanque (or boules) one day, she declared that she would allow any man who lost 13-0 in pétanque, to kiss her on the cheek.

Ten of The Best US Hiking Trails
Once, dear reader, I fantasized about walking across America, a ridiculous idea if ever I had one, if only because I was well into my late-50s when I was taken with the fantasy. Not that others haven't done exactly that before or since my imagination got the better of me. It's just that the cold hard reality of my aging bones have told me loud and clear, that "It ain't gonna happen, buddy!" Not in this lifetime, anyway. Still, I can dream, can't I? And this is as good a place as any to keep feeding that dream.

From a rocky wonderland with views of Las Vegas to the green ridges of the Appalachians, readers of the British newspaper, The Guardian share their favourite great walks. Among those recommended are walks through the New England mountains, Vermont’s 272 mile Long Trail, New Mexico’s Pecos Wilderness trails, and the Continental Divide Trail which runs through five states from New Mexico to Montana.

The Solo Traveler: 32 Tips for an Affordable Toronto
Among the many email newsletter I subscribe to (the basis of a blog entry themselves), is the very fine and comprehensive Solo Traveler site. The Canadian writer, Janis Waugh writes in her bio that she “…became a widow and empty-nester at about the same time.” In 2009, she began Solo Traveler and the site has quickly become one of the most popular sites for information and tips specifically aimed at people who travel solo—of which I am one. Of course, the information on the site is just as useful for couples, and families.

Completely at random, I have chosen to highlight the article, Affordable Toronto: 32 Free and Low-Cost Tips from her site, but seriously, take some time to browse through the hundreds of excellent feature articles awaiting you. There is surely something for everyone here.

Then and Now: Eleven Rare Historic Photos of Adelaide
Since I was born and raised—and still live—in Adelaide, Australia, I thought these rare images from local history may be of interest. Besides, May is History Month in South Australia, so that is as good a reason as any to include this article. Among the images is the one I chose to illustrate this section, which shows two nurses, or “ministering angels” from approximately the year 1913 caring for two babies at the Adelaide Children’s Hospital (now renamed The Women's and Children’s Hospital).

I selected this image for a specific reason—namely, because I spent 14 years of my working life at the Children’s Hospital (as it was still called then), and despite the pain and suffering I saw there, those 14 years were among the most rewarding years of my life. As an aside, I have been fortunate enough to have only been admitted to hospital once in my 68 years—at the very same Adelaide Children’s Hospital—when I was admitted, at the age of five, to have my tonsils removed, an incident I still remember to this day.

P.S. I should also stress that apart from the 'pain and suffering', I also witnessed many moments that bordered on the miraculous, many of which were carried out by new generations of 'ministering angels', and medical personnel.