At The Movies: The Eagle Huntress

The Eagle Huntress
This spellbinding documentary follows Aisholpan, a 13-year-old nomadic Mongolian girl who is fighting to become the first female eagle hunter in twelve generations of her Kazakh family. Through breathtaking aerial cinematography and intimate verite footage, the film captures her personal journey while also addressing universal themes like female empowerment, the natural world, coming of age and the onset of modernity.

The above synopsis comes from the Internet Movie Database entry for this film.

Immediately after watching The Eagle Huntress, I had my doubts as to whether the film was an authentic documentary, or merely a reconstruction of events that had already taken place earlier in the life Aisholpan Nurgaiv, a young girl who dreamed of becoming a hunter and trainer of eagles, a role that has traditionally been reserved for boys and men on the chilly, windswept steppes (large areas of flat, unforested grasslands in South East Europe or Siberia), in a remote corner of Mongolia. However, after a couple of hours searching for, and watching interviews with Otto Bell, the director, I am more than satisfied that the events depicted in the film are captured pretty much as they happened. 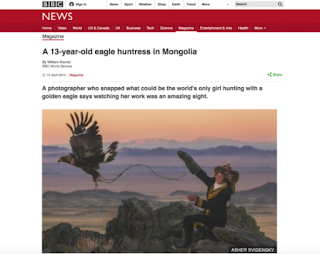 Otto had seen a series of photographs on the BBC website by the Israeli photographer, Asher Svidensky which immediately sparked his interest in Aisholpan’s life. He was also quick to see the cinematic possibilities of telling her story and bringing this to a wider world, and I’m very happy he did because the film is definitely worth seeing.

The remote setting and natural scenery (the towering Altai mountain ranges of Western Mongolia, and steppes stretching off to the far horizons) are simply stunning. The rituals and routines of daily life, and the work of herding, milking, and hunting seem hard—but not so hard as to make one grateful they don’t live in that environment. Scenes of family life are generally presented as tough, but they also come across as romantic and wholesome. Here is a family that works hard and plays hard. Their material possessions are reduced to the basic and essential. We don’t see a television anywhere, although we do see several portable radios. There are also motorbikes, vehicles of various types, a portable solar panel or two—and horses. Lots of horses.

Oh, and of course, eagles. A lot of eagles as well.

I was very impressed with Aisholpan’s ability to work with and relate to the young Golden Eagle she caught with the help of her father, Rys. These magnificent creatures are not like the pigeons and doves that flap gently about our city streets. These are large, heavy birds that weigh up to seven kilograms (15 pounds), and grow to have 7-8 foot wingspans. The trainers and hunters must be able to bear the weight of these birds as they sweep in and land on their outstretched arms with a force that I suspect would knock pasty-faced city boys like myself flying off their feet. But Aisholpan handles these flying missiles with a wide smile and nary a quiver. That she was able to do this at just 13 years of age is an even greater achievement in my opinion. Clearly, they are brought up tough on the Mongolian steppes.

The eagle hunters capture the young birds just before they are able to leave their aeries, and according to tradition, will release them back into the wild after a number of years of captivity. In fact, the film begins with a scene in which Rys, Aisholpan’s father is depicted as doing exactly this.

There are scenes in this film that may distress some viewers. Hollywood movies involving animals usually have a sentence buried in the end titles that say something to the effect that,’no animals were harmed during the making of this film.’ The Eagle Huntress carries no such note. After all, the eagles are trained specifically to hunt. Rabbits mostly, but also foxes and other small game. They also have the ability to hunt animals as large as wolves, which I have to say amazes me no end.

Here's the official movie trailer for the film

I went looking on YouTube for more clips about the film and about Aisholpan in particular, and was pleased to find several very good videos that included interviews with her and her father. These took place during their visit to the Sundance Film Festival where the film was receiving its premier screening. The Eagle Huntress is beautifully shot, and Aisholpan, her father, and her family are all natural actors who are proud to share their culture and traditions with the wider world.

The Eagle Huntress Featurette - Documentary (2016)
- o0o -
If you have a chance to see the film at your local cinema, or streaming on Netflix or another online streaming service, do so. You won’t be disappointed.

Updated: May 17, 2017
Just after uploading this post, I went looking for the original 2014 BBC News story that featured Asher Svidensky’s photographs of the young eagle huntress, which you can read here.

I also happened upon a more recent article about the film that mirrored my opening paragraph doubts about the authenticity of the film with regard to it being a true documentary. This article, Is the Eagle Huntress really a documentary?, also on the BBC News website raises genuine questions about this issue, but again as I indicated above, I am still “…satisfied that the events depicted in the film are captured pretty much as they happened.”

And finally, both articles above carry discrepancies with regard to the spelling of Kazakh names. In the first article, the young girls name is spelt Ashol-pan, not Aisholpan, though the second version is used in the second of these articles. Also the IMDB gives her father’s name as Rys, while the second article on the BBC News site gives his name as Agalai. For now I have chosen to use the same spelling as that used on the IMDB site.