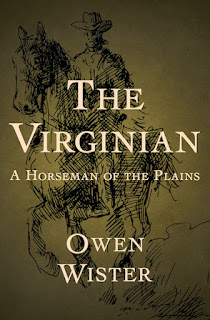 The Virginian: A Horseman of the Plains, by Owen Wister was published in 1902, and is said to be the first ‘true Western’ ever written. As such it can also claim to have been the precursor to a new genre of novels that has since gone on to spawn a million others.

The book is dedicated to Theodore Roosevelt who, judging from the dedication must have read early drafts of the book and provided comments and feedback to Wister.

The Dedication reads: Some of these pages you have seen, some you have praised, one stands new-written because you blamed it; and all, my dear critic, beg leave to remind you of their author’s changeless admiration.

The story begins with the arrival of an unnamed narrator (the Tenderfoot) in Medicine Bow, Wyoming, and his encounter with a tall, handsome stranger (the Virginian), who remains nameless throughout the novel—tho’ late in the book he is referred to as ‘Jeff’ by one of the other characters, although it is not clear if this is his real name.

The novel revolves around the Virginian and the life he lives, first as a cowboy and general hand, and then later as a foreman on the ranch of Judge Henry Taylor. Woven throughout the book, which covers a period of around five years, is the Virginian’s barely controlled conflict with his arch enemy, a man called Trampas, as well as the Virginian’s romance with the pretty schoolteacher, Molly Stark Wood.

All the Western tropes are here, gunfights, Indian raiders, cattle rustlers, rattlesnakes, hangings, and an on again/off again romance between two seemingly mismatched lovers from vastly different backgrounds and social classes. With all these elements to play with, Wister skilfully weaving together a tale of action, violence and betrayal, hate and revenge, and love and friendship.

By and large I enjoyed the story, and thought that Clint Eastwood in his younger days would have played the character perfectly. I’m surprised Eastwood never directed himself in the film. Actually, now that I think of it, Eastwood did direct himself in other variations of this story. While not always nameless, as played by Eastwood the tall, dark stranger turns up in movies like Pale Rider, High Plains Drifter, A Fistful of Dollars, For A few Dollars More, and other great Westerns.

But back to the novel. I did think the Virginian was just too perfect for the setting and the historical period in which the book is placed. He was slow to anger, rarely raising his voice about anything, and was calm and measured in his responses to whatever affront may have been directed at him. He was self-assured, knew his strengths and weaknesses (not that he had any weaknesses), was clear-headed, decisive, a complete gentleman and … on and on and on. Seriously, this guy was simply too perfect for the period being written about. 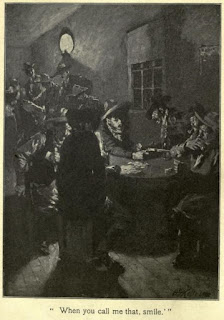 The only lapse in his demeanour came when he was frustrated enough about something or someone to occasional utter a curse or two, although always under his breath. The narrator/Wister however did not feel that it was proper to actually share these curses with readers. It seems that the delicate dispositions of readers at the turn of the 19th century would not have been able to cope with this. The closest we get to a real curse comes when Trampas calls the Virginian a son-of-a-bitch (although that curse is written “…son-of-a—.” Clearly the word ‘bitch’ was deemed too coarse to spell out for the delicate eyes of readers in 1902!

By the way, the Virginian’s response to this epithet has become quite famous in its own right. Laying his pistol on the table at which he, Trampas and other cowboys have been playing cards, the Virginian delivers the now classic line, “When you call me that, smile!”

Several other passages from the book caught my attention, and I couldn’t help wondering at their origins. For example, in one passage of dialogue the character, “Scipio le Moyne, from Gallipolice, Ohio”, while referring to the villain Trampas says:

“Trampas is a rolling stone,” he said. “A rolling piece of mud,” corrected the Virginian. “Mud! That’s right. I’m a rolling stone. Sometimes I’d most like to quit being.”

Now I don’t for a minute assume that this is the first time the words, “I’m a rolling stone” are appearing for the first time in print—but then again who knows?

Some other brief quotes took my fancy as well.

“When yu’ can’t have what you choose, yu’ just choose what you have.”

“In bets, in card games, in all horse transactions and other matters of similar business, a man must take care of himself, and wiser onlookers must suppress their wisdom and hold their peace.”

In other words, don't butt in when it's none of your business.

While the language of the novel is a little dated, The Virginian: A Horseman of The Plains is still worth setting aside some time for. The book is available as a free download from the Gutenberg Project website, as are eleven other titles by Owen Wister. Click here to download the eBook…
- o0o -


Note: The cover illustration above is from the Early Bird Books eBook edition. This is not free but can be download from the iBooks store for just ninety-nine cents (higher charges may apply via iBooks stores in countries other than the United States).
Posted by Jim Lesses at 6:53 PM