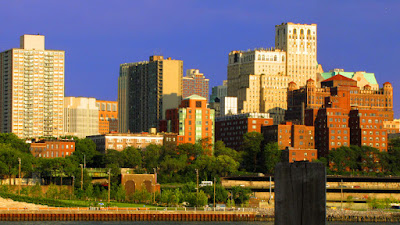 ...
During my two month stay in New York City in 2010, one of my favorite places to hang out on Friday evenings was Pier 17, one of the last remnants of the extensive pier system that jutted into the waters of the Hudson and East Rivers.


As the sun set in the west, a beautiful golden glow would light up the buildings along the Brooklyn side of the East River. 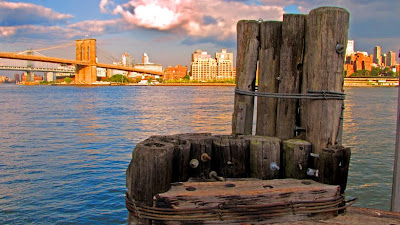 ...
As an added bonus, Friday evenings at 6pm also saw a weekly roster of great indie bands from New York and elsewhere playing free gigs from the small stage set up on the pier. Pier 17 was always packed with office workers winding down at the end of the working week, and visitors enjoying the vibe and the stunning views of the Brooklyn Bridge. 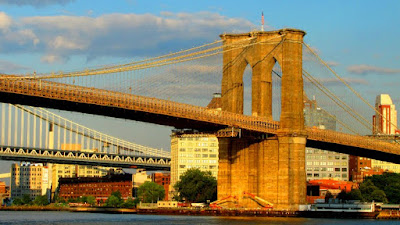 ...
As I have written elsewhere on this site (Brooklyn Hidden Harbor Tour,  and Up A Lazy River to Bear Mountain), I have a particular fascination – some might call it a fetish – with rivers and water borne activities, and another of the pleasures of sitting at the end of Pier 17 was watching the constant too-ing and fro-ing of pleasure boats, working boats and other marine activity on the East River.

Below: a river barge (out of view) is being pushed up the East River by the tugboat Calusa Coast. From whence have they come, and to where are they going? And what are they transporting? 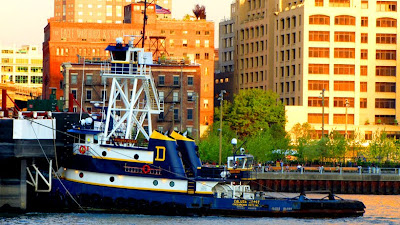 ...
Below: I never did take this Friday evening river cruise, but next time I think I will add it to my list of ‘things to do in New York City on a Friday night’ – or indeed any evening the vessels heads out for a cruise up the East River. 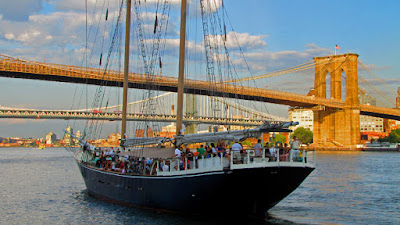