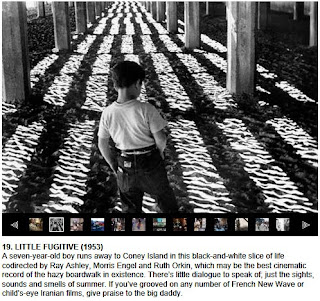 Another in our weekly selection of slide shows and video’s that have caught our attention and interest while trawling across the far reaches of the Internet. Enjoy…

Of course you will find Martin Scorsese's searing Taxi Driver, and Sidney Lumet's Dog Day Afternoon here, as well as the original Taking of Pelham 123 and Woody Allen's Manhattan. Both Scorsese and Woody Allen score two films in Time Out's top 20 with the inclusion of Scorsese's 1985 flick, After Hours, and Allen's Hannah and Her Sisters (1986).

You will also find some less known films on the list, including the 1953 film Little Fugitive (see image above), John Cassavetes’s debut 1959 film, Shadows (1959), and 1957s Sweet Smell Of Success. See the full slide show here…
Unfortunately, my favourite New York film, Sergio Leone’s Once Upon a Time in America is not listed among the top 20, which only goes to show that even Time Out can’t always get it right ;- ).