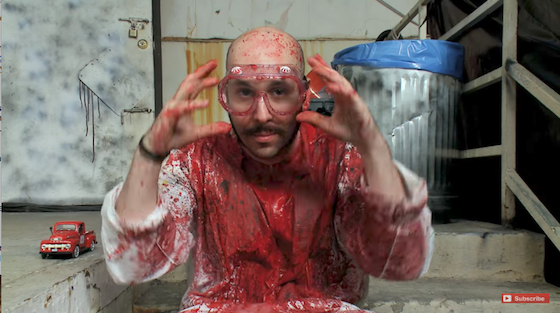 OK Go: How to Find a Wonderful Idea
If you are a popular music fan that has been paying any sort of attention to the music scene over the past 10 or 12 years, you must surely have heard of the American rock group, OK Go. If you haven’t you are in for a delightful surprise. OK Go came to prominence after the 2006 video for their song Here It Goes Again, in which the band performed a complex routine on motorised treadmills, went viral with the help of YouTube, and other video sharing sites.

Seemingly defying all odds and bets that the band could would not be able to top the hype generated by that video, OK Go have in fact gone on make many more innovative and genre defying videos that have set the benchmark so high that other bands have simply given up trying to match them. The only exception I can think of to that statement is the always innovative Icelandic artist, Björk.

Where does OK Go come up with ideas like dancing in zero gravity, performing in ultra slow motion or constructing a warehouse-sized Rube Goldberg machine for their music videos? In between live performances of "This Too Shall Pass" and "The One Moment," lead singer and director Damian Kulash takes us inside the band's creative process, showing us how to look for wonder and surprise.

The above talk, begins with OK Go performing This Too Shall Pass on stage while the video for the song plays in the background. But how, you may be asking, was this massive Rube Goldberg machine built and engineered? The answer my friend, is … in the video below. Adam Sadowsky takes us through the process, after his team at Syyn Labs were given the task of building it. He tells the story of the effort and engineering behind their labyrinthine creation that quickly became another YouTube sensation for the band.

The team spent months setting up the set in a 10,000-square-foot warehouse. The Rube Goldberg machine involved 89 distinct interactions, and required 85 takes (of which only three were completely successful). Two pianos and 10 television sets were destroyed during the shoot—and some of these trashed items can be seen lining a wall in the warehouse.

Having watched the video numerous times before watching this TED talk, I could never understand why it was that the band members wore clothing covered in paint. After listening to Adam’s presentation, the penny dropped so to speak, and I realised that this was as a result of previous unsuccessful attempts to film a flawless video. Anyway, the president of Syyn Labs, Adam Sadowsky explains all. Oh, and the finished video for the song is included at the end of Adam’s all too brief presentation.

About OK Go
Singer and video director Damian Kulash, Jr. and bassist Tim Nordwind met at summer camp in 1987, and a decade later they formed OK Go. With Dan Konopka as drummer and Andy Ross as guitarist and resident computer programmer, they've built a unique career at the intersection of music, visual art, technology, and science. They're among an emerging class of artists whose 21st-century brand of experimental creativity dissolves the traditional boundaries between disciplines.

"When our band started, music and art were actually different things," says Kulash. "Musicians made plastic discs and artists made objects for galleries. Now we all make ones and zeros, so the categorical distinctions don’t make much sense anymore."

Here is the video for The One Moment, the second song OK Go performed on stage during their TED presentation.

And finally, in case you are not among the millions of people who have seen Here It Goes Again, the video that started it all for OK Go, why not take a look at it now? Enjoy.