NYC Day 6: A Visit to MoMA, and The Yankees 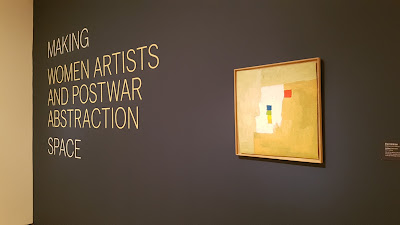 A FIRST LOOK AT MoMA
Here's a quick wrap up of my main activities over the past three days. On Thursday I made my way to the Museum of Modern Art for the first of what will be many visits. I spent 90 minutes or so taking a good look at Making Space: Women Artists and Postwar Abstraction, a major exhibition that has been underway for a month or so already.

To be honest, I don't pretend to understand abstract art, and I suspect that like a lot of people who don't really 'get' this type of art, I tend to have a somewhat poor opinion of it. Even as I wandered through the exhibition, I could see other visitors making comments to each other about some of the works on display. The general feeling that a lot of people have about abstract art -- including myself -- is summed up in the comment, "Even I could do that!" 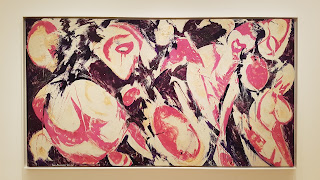 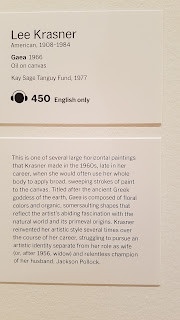 To which the artist in question might have asked, "Then why didn't you?"

It's a fair question, and one I don't have a good answer to, so I'll just leave lying there on the table for ongoing contemplation.

Once I felt I had seen enough of the abstract art, I took a quick look at Frank Lloyd Wright at 150: Unpacking The Archive, another major exhibition that will require multiple visits to get the full value from. In fact, I was quite overwhelmed by the sheer scope of the exhibition during my brief walk through the twelve rooms (each of which focuses on a different aspect of Wright's extensive career). 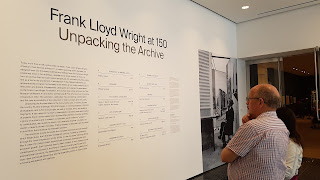 From this exhibition I made my way up to the general art wings where I spent ten minutes with Money's Water Lilies, and where I paused briefly before some Mexican artists including of course Diego Rivera and Frida Kahlo. By this point I had reached my art appreciation limit, and was ready for some lunch. I was also dog tired, and would have loved to be able to lie down and get some sleep, but I have decided to stop my afternoon naps and push through each day well into the night in an attempt to get on top of my ongoing struggle with jet lag. 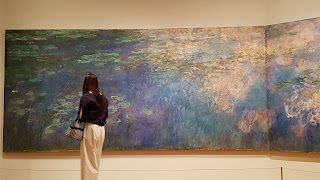 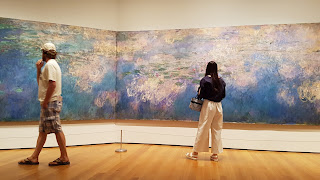 N.Y. YANKEES vs L.A. ANGELS
As tired as I was, and I was very tired, I took a Bx13 bus to Yankee Stadium to watch the New York Yankees take on the Los Angeles Angels, in what was being sold as a half-priced game. I should have realized of course, that 42,353 other people (or thereabouts), had also decided that they would take advantage of this special promotion. The massive queues at all the gates to Yankee Stadium had to be seen to be believed, and once seen had to be negotiated with great forbearance as they inched their way past hard-pressed security officers. Oh, and as for that 'half-price deal', it seems I didn't qualify for the deal because the promotion was being sponsored by MasterCard, and tickets had to be purchased with a credit card from that company, and I had left my card home. Ces la vie!

Since I had made the effort to get to the stadium, there was nothing for it but to pony up $21, which got me a seat in the boondocks high above the field of dreams with an eagle eyed view of the play far below. In fact, I joked to nobody in particular that if I was any higher up I would be in danger of getting nose bleeds because of the rarified atmosphere. Another pithy thought occurred to me to the effect that if I had to go any higher, I would need to be issued with bottled oxygen, again due to the rarified atmosphere so high above the ground. Some days I surprise even myself with my pithy thoughts!

For the record, the Yankees copped a shellacking from the Los Angeles Angels, despite leading the Angels early in the game 5 -1. I left at the start of the ninth innings when the Angels had reversed their fortunes and were well in the lead with a score of 10 - 5. Ces la vie, indeed!
Posted by Jim Lesses at 11:42 PM