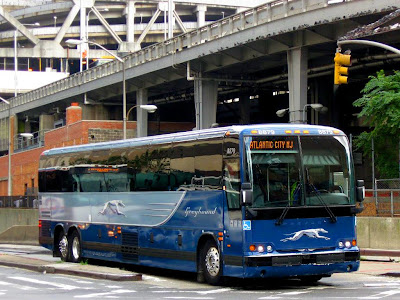 Maybe I was lucky.

Reading through other trip reports of passengers travelling on the North American Greyhound Bus network, one could be forgiven for thinking that only the foolhardy (or brave), use the network as a means of travel in the United States and parts of Canada. Online travellers tales are full of warnings and horror stories of cancelled departures, over booked buses, smelly fellow passengers (and even smellier toilets), crying children, and cranky staff.

On the morning of Monday, August 30, 2010, I boarded a Greyhound Bus deep beneath New York City’s massive Port Authority Bus Terminal for the first leg of a bus trip that would take me south through New Jersey, Pennsylvania, Delaware, Maryland, Washington, DC., Virginia, North and South Carolina, Georgia, Alabama, and finally to New Orleans in Louisiana.

The first leg of the journey was going to be short and sweet. to , was an easy ride of 2.5 hours for a cost of just $6.00. A bargain in anyone’s language. So quick and uneventful was the trip that it only warranted one and a half lines in my travel journal. I was however, very excited to be on one of the newer coaches in the Greyhound fleet which offered free WiFi, a service I happily took advantage of.

I spent four nights in Philly (see Streets of Philadelphia) and early Friday morning boarded another Greyhound for the twelve hour ride to .

A woman, three seats back talked to herself constantly. I was hoping she would go to sleep but she kept up a constant flow of whispering and animated conversations with the voices in her head before disembarking in – less than two hours into the trip.

Apart from one or two other Caucasians, all the other passengers appear to be either African-American or Hispanic. Interstate and intercity bus travel definitely seems to be the poor man’s mode of travel. I was going to say, the poor man’s preferred method of travel, but preference has nothing to do it. I suspect it is simply a case of necessity. They, like me, can’t afford to travel by plane or train, probably don’t own cars, and so have no other option but to take a bus to wherever they need to get to.

My journal records: There are two children on board (male and female, and both about the same age (8-9 years)). Thankfully they are both quiet and well behaved.

The journal also notes that the bus does not have WiFi – unlike the one between and . In fact, a check of the Greyhound Bus website shows only six routes equipped with the newest WiFi enabled buses (and yes, to is one of them). One can only assume, and hope, that all their coaches will eventually be so equipped. I also wrote: This bus is older, noisier, and seems to rattle and shake over every bump in the road. 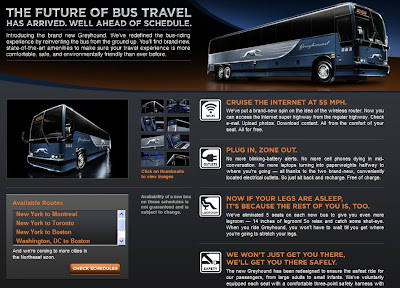 It occurred to me that long distance coaches should be fitted with drop down trays – of the kind airline seating has. Drop down trays would be a great boon to passengers who want to rest books, magazines, food or laptops on something more stable than their knees.

At some point we passed Lincoln Financial Field and it strikes me just how dull and unimaginative corporate sponsorship can be. Like Etihad Stadium in , AAMI stadium in , and other football stadiums around (and the world?), the names have no resonance, history or nostalgia to excite the imagination of fans or visitors. Later on, crossing into and entering I notice another dumb corporate stadium name: M&T Bank Stadium.

It really gets the heart pumping, doesn’t it? Yawn.

The man in the seat behind me sleeps through several phone calls. Finally, after at least six attempts and one or two hours of trying, his “baby” manages to wake him up and get him to answer the phone. “Hi baby – wassup?” he intones drowsily, before explaining the he has been asleep. Then… “You’re breaking up… I’ll call you back,” he says, before promptly nodding off again.

The views along I-95 consist mostly of dense green vegetation which occasionally opens up to reveal rich farmlands, or housing developments which seem newer than the ramshackle homes on the edges of most cities and towns. We pass a semi-trailer. Window open, cigarette dangling from a corner of his mouth, the driver steers with one hand while trying to write something in a small notebook with the other.

The towns slip by in a blur of motion and odd familiarity. Each one seems to have a Walgreens, Burger King, McDonald’s, and pizza parlour on the edge of town – sometimes several. Then there are the hotels and motels that line ’s highways. Comfort Inn, Econolodge, Marriott, Hilton and dozens of others. Large concrete slabs which act as sound barriers, line parts of the highway. These indicate some sort of life beyond the eight-laned freeway system we are speeding down.

On the outskirts of .., a sign points to President Lincoln’s Cottage. 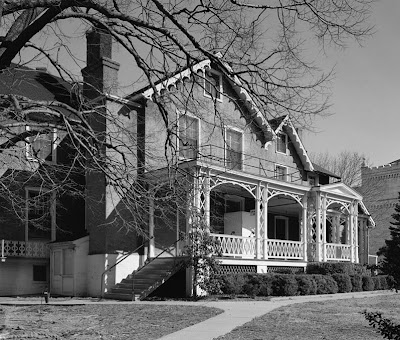 The historic Cottage, built in the Gothic revival style, was constructed from 1842 to 1843 as the home of George Washington Riggs. Lincoln lived in the cottage June to November 1862 through 1864 and during the first summer living there, drafted the preliminary draft of the Emancipation Proclamation. [Source: Wikipedia…]

At I catch my first and only glimpse of the White House, and immediately regret not allocating a day or two for visiting the national capital.

After a short layover in , we hit the road again. This leg of the trip finds the bus pretty much completely full. I notice, however, that the seats immediately behind the driver are empty, as are the first two seats on the right nearest the door. This is something I note again and again as the trip progresses. It is only while doing some research for this entry that I learn why. On , just weeks after the momentous events of 9/11, a deranged passenger tried to cut the throat of a Greyhound Bus driver. The driver survived the attack, but in the crash that resulted from the assault, the assailant and five other passengers died.

Again “…on September 30, 2002, another Greyhound driver was attacked near Fresno, California, resulting in two passenger deaths after the bus then rolled off an embankment and crashed. Following this attack, driver shields were installed on most Greyhound buses that now prevent passengers from directly touching the driver while the bus is in motion, even if the shield is forced open. On buses without the shield, the seats behind the driver are normally off-limits.” [Source: Wikipedia…]

Based on my observations, these seats are still left empty, even when there are shields installed on Greyhound Buses.

I am feeling much better now that I’ve had a coffee and sandwich during the layover in . As we head out of town we pass the Pentagon on the right. We are within clear view of the building and while we are some distance from it, it is obvious just how big the massive structure is.

Heading south on I-95 again, we quickly leave the , city limits, and enter . We pass into , where highway signs point to , and other towns that featured prominently in the American Civil War. It was near that the first major battle of the war (often referred to as the Battle of Bull Run), was fought on . Somewhere off the highway is , where Confederate general Robert E. Lee achieved his greatest victory. Again I can’t help feeling regret for the lack of time I have to explore this part of the country. 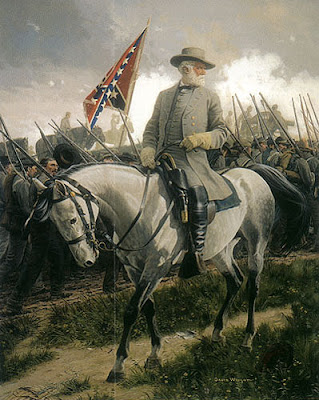 Image: Confederate General, Robert E. Lee, checks to see if the Yankees are coming. They are!

As we approach , we encounter our first traffic delay which slows us down to about half speed. Since the coming Monday, September 4, is Labor Day, a national holiday, I assume the hold-up is a result of holiday traffic heading out of Washington to destinations further afield. In any event, the bottleneck soon passes, and we quickly get back to our regular speed.

Occasional glimpses of rolling green country passes on both sides of the highway, but the view is mostly obscured by thick growth along the roadside verges. Sudden openings reveal edges of towns and small regional cities here and there, before the view closes up again.

A line in my notebook observes: No wildlife and no road kill along the highway!

If this journey were taking place on Australian highways, our route would be marked with the putrefying bodies of the occasional fox, careless magpies and crows, and dozens of kangaroos – large and small. But on this trip I don’t recall seeing any signs of road kill, anywhere.

Somewhere along the highway I started writing this:

Chewing up the highway, spitting out the miles,

Greyhound Bus , crowding in the aisles.

Rolling down the Interstate, they call I-95,

Mighty glad to see you folks; glad to be alive.

Gonna take the easy road, just so I can see,

This land they call , from sea to shining sea.

Quote of The Trip: The African-American behind me receives a call from his lawyer talking about a possible upcoming trial for an offence which seems to involve a vehicular accident. They talk for quite some time, and he becomes more animated and louder as the conversation progresses. During their conversation he delivers the Quote of The Trip: “I ain’t afraid of no trial – I’ve been on trial all my life!” 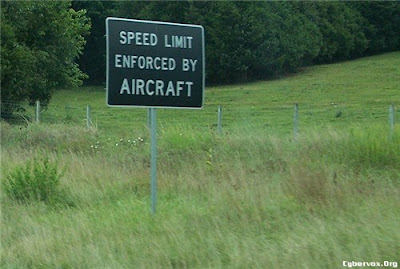 Along the I-95, the state border between and occurs about half way between and . With the late afternoon sun casting long shadows across open farmland, it doesn’t take long before we pull into the Greyhound Bus station on Raleigh's, West Jones Street, and my bus travels for the day come to an end.

That’s it. Twelve hours on the road, and not a thing to complain about. In deed, at each stop along the route, the bus arrived and left on time and without incident. There were no screaming babies or whining children, no psycho killers or objectionable passengers, and no breakdowns or major delays.

Drivers were polite, and the announcements at the start of each leg were brief and to the point: No smoking on board the coach – including the restroom; phone conversations were to be kept as quiet and as brief as possible; other electronic devices (MP3 players, portable CD/DVD players, Gameboys, etc), should be used with headphones or ear buds only. That type of thing.

Having access to WiFi would have helped keep me amused and occupied during the journey, but when all is said and done, it wasn’t a major issue.

Travel Tip: Drivers do not check to see if passengers have returned to the vehicle before setting off on the next stage or the journey. Nor do they check to see if new passengers have boarded the bus. The onus is on you to pay attention to driver announcements about the length of brief stops to pick up and discharge other travellers along the route, and the length of any rest stops. As long as you do that, you do not have to worry about missing the bus.

In Part 2, after a weekend stop in , the journey continues to the , .