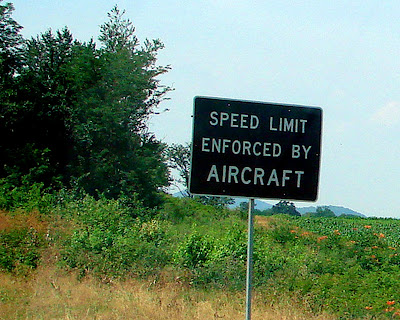 So there I was, Greyhound-bussing it down the I-95 through , when I was startled out of my reverie by signage along the roadside proclaiming: SPEED LIMIT ENFORCED BY AIRCRAFT.

What? It had to be a joke, didn’t it? How on earth do you enforce speed limits using aircraft? My mind was immediately awash with visions of laser-guided missiles speeding to their targets from high-flying B1 bombers. No doubt, the resulting ‘shock and awe’ effect of this deadly force on any law breakers was sure to keep the rest of Virginia’s citizens (and other out of state road users), well within legal speed limits. It seems to me too, that these signs tap into the paranoia some people have that they are constantly being watched by ultra-quiet high-flying aircraft or satellites.

As it happens, the sign is not a back country Virginian joke. The state does indeed monitor speed limits on state highways by occasionally using light aircraft (such as Cessna’s) to check motorists driving habits.

Aerial enforcement (as it is known), has been monitoring motorists from the air in since July, 2000. Highways are marked at various points with lines measuring specific distances (generally half-a-mile apart and called “fixed course sites”). When a suspected speeder enters the course, officers in the sky determine the speed of the vehicle using their VASCAR system (Visual Average Speed Computer and Recorder). This is achieved by measuring average speed over that half-mile distance.

If the time taken to cover that half mile is faster than the officially recorded time it takes to complete that distance at the maximum lawful speed, airborne officers alert a waiting highway patrol car, whose officers then pull you over and issue you with a speeding fine.

This still conjures up visions in my head that suggests using a hand-grenade to kill a fly! And so it happens to be in practice.

The odds that a speeding motorist will be caught in this way are well in the motorists favour. Aerial enforcement is understandably very expensive, and given the parlous state of most state government finances throughout (which I suspect includes ), the chances that drivers will be busted for speeding by high-flying aircraft officers is virtually nil. But don’t quote me on that! If you get busted by a combined aerial and highway patrol – it’s your own fault. Still, I suspect the signs do have the effect of encouraging most motorists to keep within the speed limit, and that can’t be a bad thing.

So while my visions of armed B1 bombers or Apache Attack Helicopters patrolling the highways and byways of , vaporizing transgressors from the highway are highly fanciful and obviously wrong, I’m sure I am not the only person to imagine this bizarre scenario – as this computer enhanced image attests: 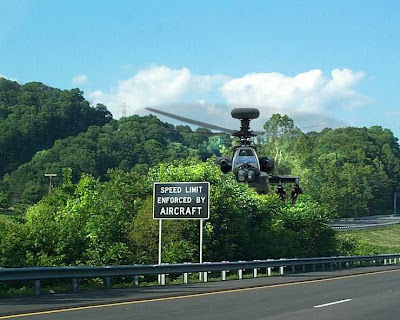 Image sourced from the Internet