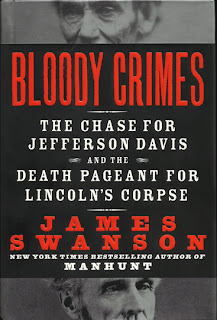 Bloody Crimes: The Chase for Jefferson Davis and the Death Pageant for Lincoln’s Corpse1 – to give my copy of James Swanson’s 2010 book its full title – is a detailed chronicle of a momentous period in American life, which, as the title suggests, deals with the assassination of President Abraham Lincoln; the historic journey by train of his remains from Washington, DC to Springfield, Illinois; and the hunt for the Confederate President, Jefferson Davis, in the final weeks of the American Civil War.

While the core of the book covers a period of less than four weeks – from the death of Abraham Lincoln on April 15, 1865 until the capture of Jefferson Davis on May 10, 1865 – there are chapters bookending this material which provide information to place these two larger-than-life characters in the right historical setting.

Apart from a passing mention or two, James Swanson does not deal with the hunt for John Wilkes Booth – Lincoln’s assassin – or that of his co-conspirators in this book. Swanson’s first book, Manhunt, covers this ground extensively, allowing him to concentrate on the parallel, but quite different journeys of Lincoln and Davis.

And what journey’s they are.

Following Lincoln’s murder, his body undergoes a 1,600 mile trip by train from Washington, DC through Maryland, Philadelphia, New York, Ohio, Indiana, and finally onto its final resting place in Lincoln’s hometown, Springfield, Illinois. As the funeral train steams across the American landscape, thousands of people line the route and crowd town and city ceremonies to honor the presidents life and to mourn his passing. The closer to Springfield the train gets, the larger the crowds and the more intense the mourning rituals.

While all this is going on, Confederate President, Jefferson Davis is heading into the south, hoping against hope to rally his scattered generals and war weary soldiers for the ongoing fight for secession.

Falsely accused of being a co-conspirator in Lincoln’s assassination, Davis eventually runs out of money, support, and options, and is captured along with his wife, children, and a small group of loyal aides, and jailed in anticipation of a trail that never takes place. Ultimately, he is released – neither guilty nor innocent – of crimes against the state, and lives out the rest of his life at Beauvoir, an estate near Biloxi, Mississippi.

Following Jefferson Davis’s death in New Orleans on December 6, 1889, his own remains underwent their own pilgrimage by train from the Crescent City through Mississippi, Georgia, South and North Carolina, and on to Richmond, Virginia.

But none of the above, captures the intimate details and minutiae that James Swanson fills Bloody Crimes with. Richly illustrated, and carefully researched, Swanson’s 464 page book takes readers inside the Peterson house to recount the minutes and hours following the shooting at Ford’s Theatre. The boarding house, owned and operated by William and Anna Peterson was just doors from the theatre. It was here that Lincoln, mortally wounded from a single gunshot to the head, spent the final 12 hours or so of his life.

His coverage of Lincoln’s funeral train is equally detailed, again using many contemporary accounts that followed its route through the northern states of the Union. Interspersed with these descriptions, Swanson examines the southern journey of Jefferson Davis as he abandons Richmond, Virginia after the surrender of Robert E. Lee, and heads south by train with what little is left of his war cabinet and treasury.

James Swanson regards Jefferson Davis, as one of the “Lost Men” of American history, and it wouldn’t surprise me if he decided to turn his attention to telling Davis’s story at some future date. Sadly, in the epilogue to Bloody Crimes, Swanson writes that Beauvoir, the family home near Biloxi was completely destroyed when Hurricane Katrina roared across the Gulf in August 2005, sweeping away priceless artefacts, documents and other materials kept there.

Students of American history should find Bloody Crimes fascinating. I for one, highly recommend it. 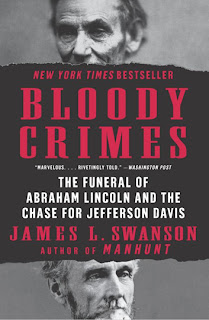 Notes:
1Intriguingly, Amazon gives the title of this book as Bloody Crimes: The Funeral of Abraham Lincoln and The Chase for Jefferson Davis (see image).

James Swanson seems to have carved out a niche for himself as an expert on the assassination of President Abraham Lincoln and the events surrounding that historic event. He has written or co-written several other books on the topic including, Manhunt: The 12-Day Chase for Lincoln’s Killer, and Lincoln’s Assassins: Their Trial and Execution (with Daniel Weinberg).

Not to be confused with Bloody Crimes, Amazon also sells a book titled, Bloody Times: The Funeral of Abraham Lincoln and the Manhunt for Jefferson Davis. This is described on Amazon as “...an adaptation for young people of his adult book Bloody Crimes,” so be sure you are purchasing the ‘adult’ version of the book, if that is what you are looking for.

Swanson has also co-written, The Lincoln Assassination Encyclopedia with Edward Steers. Finally, most of these books are also available in Kindle editions, and as audio books through Amazon.
Posted by Jim Lesses at 5:06 PM