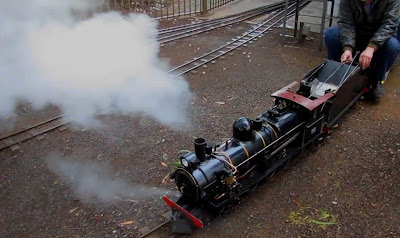 ...
The South Australian Society of Model and Experimental Engineers (SASMEE) runs a variety of ride-on model steam trains at their SASMEE PARK site at Millswood, Adelaide, South Australia. I used to visit the site as a teenager, and had not been back to the park for over 40 years until I visited again with my niece, her husband, and two children, in August 2010.

As a teenager I loved to examine the beautiful steam-powered model ships, and stunning steam trains, each loving built by skilled engineers and craftsmen whose attention to detail and pride in their work was clearly evident.

First incorporated in 1927, the Society began developing the Millswood site in 1947, and have been adding to and extending the tracks and facilities ever since. The site includes a large boiler house containing various historical exhibits, the oldest of which dates back to the 1880s.

Entirely volunteer run, the park is open to the public on the first Sunday and third Saturday of each month - weather permitting - from 2 to 4.30pm.

With an entry price of just $5 for adults and $3 for children, SASMEE PARK is one of my Adelaide 'Hidden Gems'. Once inside the site, children and adults can ride the trains as often as they like for no additional cost. There is also a large pond on site where SASMEE members and members of the public can sail model boats (some steam powered).

As you can imagine, the site is very popular with children of all ages, and because of the range of facilities and activities on offer, SASMEE PARK is the perfect place to hold birthday parties for any number of children.

Unfortunately, on the day I visited with family members, it was overcast and soon started raining, which cut our visit short, which is why in the video below you only see the steam trains, and none of the other facilities – although you can catch glimpses of the site as the video progresses. I will return to the park over the summer to shoot more footage of the whole site and add that to an updated post in due course.


Check the SASMEE website for full details about the park.

Note: Enclosed footwear *must* be worn if you wish to ride on the trains. You cannot wear light, flimsy or open-toed footwear. This includes thongs (flip-flops), sandals and scuffs.