In Review: Midnight in Paris 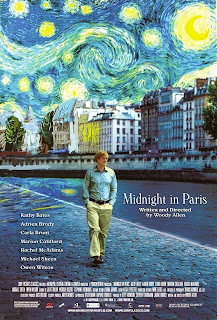 I have a terrible admission to make.


Until I saw Woody Allen’s latest flick, Midnight in Paris last night, I can’t remember going to see a Woody Allen movie in over 20 years. Twenty years! Why? What happened? Even I don’t rightly know.


I always enjoyed his early career as a writer, actor and film director, but for some reason I can no longer remember, I lost interest. Or maybe I just became more interested in the work of directors like Martin Scorcese, Francis Ford Coppola, the Coen Brothers, David Lynch, and one or two others.


I’m kicking myself now. Kicking myself, because I thoroughly enjoyed Midnight in Paris right from the opening montage of images that showed the ‘city of lights’ in all its stunning beauty. And kicking myself because I am sure I have missed any number of other excellent Woody Allen films over the past 20 years or so.


Still, there’s no point berating myself too much. Looking on the bright side, I’ve got at least two decades of catching up to do, as I program my personal Woody Allen retrospective in the coming months, and uncover more ‘lost’ gems from his film making oeuvre. But enough of the self abuse – on to Allen’s latest offering.


Part romantic comedy, and part fantasy, Midnight in Paris tells the story of Gil (Owen Wilson), a successful Hollywood screenwriter who is having problems finishing off his first novel. With his fiancée, Inez (Rachel McAdams), he travels to Paris with Inez’s rich, conservative parents, and understandably falls in love with the city. Unfortunately, Inez and her parents are less than enthusiastic, especially when Gil declares that he would love to live and work in Paris. Inez on the other hand, is apparently looking forward to married life in Malibu!


Gil believes that Paris’s golden age was the 1920s. An era that saw some of the greatest writers and painters of the twentieth century (both American and European), make Paris their home. At the end of a drunken night out with Inez, her ex-boyfriend Paul (Michael Sheen), and his wife Carol (Nina Arianda), Gil decides to walk the streets of Paris to clear his head. As a clock chimes the midnight hour, Gil is literally transported back in time to a party set in 1920s Paris, at which a host of famous writers and artists from that period are present.


Over a period of four or five nights, Gil meets Cole Porter, Zelda and F. Scott Fitzgerald, Gertrude Stein, Picasso, Dali, Hemingway, and many more writers, painters, dancers, artist’s models, as well as other luminaries of the age.


I could write a lot more about the plot, but if you have yet to see the film, I don’t want to spoil the enjoyment I am sure you will get from it, by giving away too many plot points or quoting directly from the script.


As you might expect, Woody Allen has great eye for settings, and it has been years since I have seen Paris shown off to such great advantage in a movie. I was in Paris myself just over a year ago, and it was a delight to see scenes set in many of the places I myself visited during my stay. Places like the Louvre, the Palace of Versailles, the Musée de l’Orangerie (for a lovely scene involving Monet’s Water Lilies), Notre-Dame Cathedral, the famed Shakespeare and Company bookshop, the River Seine, and many others.


I thought every performance in Midnight in Paris, was spot on. Even from those actors with not much more than walk on parts. The dialog was sharp, witty, insightful, and the transitions between the present and the 1920s seamless. I spent the whole 90 minutes with a big smile on my face, and I left the cinema wishing that Woody Allen could have added another 30 minutes to the overall length of the film.


If you are into classic literature, art and cinema, there is much to delight and entertain you in Midnight in Paris. Apart from the great settings, and the excellent acting, you should have fun picking up the numerous artistic and cultural references Woody Allen sneaks in to his film.


My highest accolade? I enjoyed Midnight in Paris so much I intend to go back and see it again, before it disappears from the big screen. Not only that, but this is one movie I will definitely buy when it is released here on DVD – and for me that is always my biggest stamp of approval.