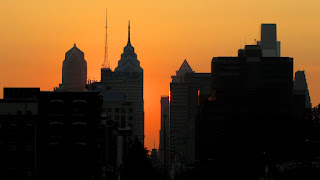 Image: The sun sets on a Philadelphia skyline
It has been several days since I left New York City for Philadelphia. Having been here three days now, I thought it time to give you my initial impressions of this, the first ‘modern’ city in the New World. To my delight, the Comfort Inn Hotel is perfectly placed to explore the section of Philadelphia known as Old City, where some of the most interesting surviving areas of the Colonial era are located.

For instance, the area around the National Constitution Center has many historical buildings worth checking out including, Independence Hall and Congress Hall where many of the great debates relating to the Declaration of Independence raged. Here you will also find the Liberty Bell, one of the most important icons of American independence, the exceptional National Constitution Center, Christ Church where many of America’s founding father’s prayed and where seven signatories to the Declaration of Independence are buried including Benjamin Franklin, whose final resting place (which he shares with wife Deborah) is marked only by a large weather beaten stone slab.
… 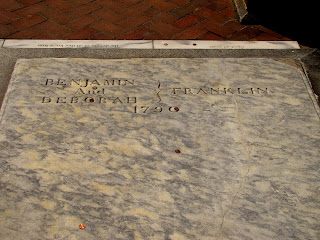 Image: The final resting place of Benjamin Franklin and wife, Deborah
On my first walk I visited the U.S. Mint, where most of the nation’s coins are minted. A self-guided tour steers you along three floors of exhibits, artefacts and historical information outlining the history of the production of money in the United States. At various points along the tour you are able to look down onto the floor of the building where massive machines and presses produce millions of dollars worth of coins each week.

Personally, I was disappointed visitors didn’t get free samples of freshly minted new gold dollar coins. I’m mean, really, is that too much to ask?

I walked down Elfreth’s Alley, a narrow alleyway filled with homes dating from the 1750s and 1760s. All the homes, bar one, are still being rented and lived in by locals. The one exception has been turned into a museum filled with artefacts from the colonial era.
… 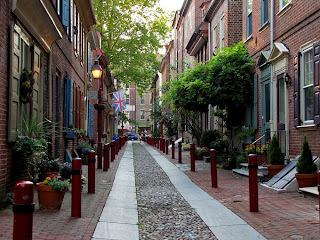 Image: Elfreth’s Alley
I lined up with many other visitors to see the Liberty Bell, which despite several attempts at repair, continued to fracture to the point where any ongoing attempts to plug the crack where finally abandoned in case the break continued to worsen.

To cap off an interesting afternoon, I was even able to observe a demonstration protesting against some of the new anti-immigration laws being enacted by Washington and other U.S. states. It would seem that under U.S. law, any child born in the United States is automatically classed as an American citizen. Unfortunately, giving birth to a child does not automatically bestow citizenship on the child’s parents. This has led to situations where a child’s mother or father has been deported back to their land of birth, leaving the child without at least one parental figure. Deportation may happen for a variety of reasons, including being convicted of a criminal offence.

This demonstration took place, appropriately enough on the lawns of the National Constitution Center where a large granite block clearly proclaims the words of the First Amendment which guarantees the right to free speech (see image below).
… 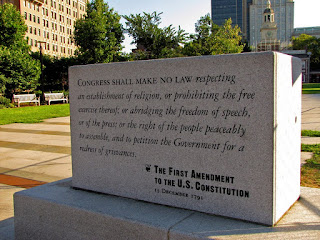 Image: The First Amendment cast in stone…
I was very impressed with the honesty with which many displays regarding this period of American history have addressed the issue of slavery. For example, at the site where remnants of George Washington’s first Presidential home once stood, and which is now being turned into a new exhibit, display boards feature information about nine of Washington’s own slaves, and discuss at length his attempts to arrange for the recapture and return of one female slave in particular called Ona (or Oney) Judge.

As a teenager, Ona Judge became the personal maid to Washington’s wife, Martha. Ona was described as a talented seamstress, who despite her (presumably) privileged position “…seized her freedom and escaped to New Hampshire…”

The description continues: “…Washington tried relentlessly to recapture her. He discovered where she had gone when a friend of Martha Washington’s granddaughter happened to encounter Ona in Portsmouth, New Hampshire. Washington wrote to the Collector of Customs in Portsmouth and requested that he apprehend Ona and send her back.”

After speaking with Ona, the official declined to do so.

Two years later, Washington asked his nephew Burwell Bassett to seize Ona and her child, born since her escape. Bassett confided his intentions to John Langdon, the Governor of New Hampshire, and Langdon sent a warning to Ona which enabled her to again escape recapture.

One can only speculate regarding George Washington’s obsession with recapturing Ona Judge. Was it because she was so close to Martha Washington? Did he pursue her at Martha’s insistence? We may never know. However, the description that “…Washington tried relentlessly to recapture her,” does not reflect well on the nation’s first President.
… 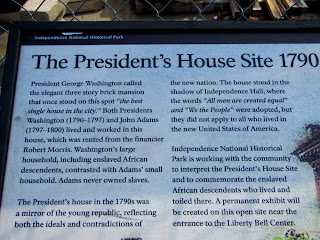 Image: Telling it like it is. ‘Honest’ George Washington not quite the picture of perfection we were led to believe he was
This openness and honesty continues at the National Constitution Center where state of the art displays again trace the difficult ‘birth of a nation’, while addressing issues of race, slavery, immigration, numerous wars, and other vital matters of state.

For me, each building, display, and exhibition space has been like putting together parts of a giant jigsaw puzzle that for many years has symbolised the United States of America. The more I read and learn, the greater the level of understanding I am able to get about the land and its people.
Posted by Jim Lesses at 8:18 AM