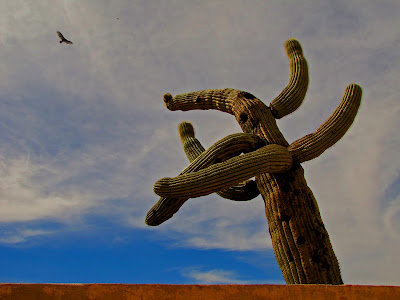 Image: Saguaro cactus rising high over the desert floor
If you ever hear me complaining about the occasional Adelaide heat wave again, please feel free to remind me about my stay in Tucson, Arizona, where the average summer temperatures are in the 100 plus degrees range – and not just for three or four days at a time, but often for weeks at a time. Apart from that, the heat, like South Australia’s summer heatwaves, is very dry and contains almost no humidity, which is a great relief.

I have come to Tucson to catch up with my American cousin, Maria and her husband, George, who have been living here for some 20 years.

As we left the airport at 10.00PM, just after my flight touched down from New Orleans (via Denver), my attention was immediately drawn to the giant saguaro cacti in the airport car park. These amazing plants can grow up to 50 feet in height, and can live up to 200 years. 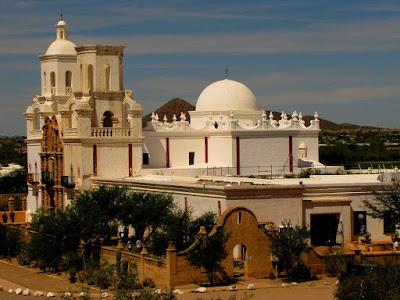 Image: San Xavier Mission
Having introduced me to their friend (another George), my very gracious and accommodating hosts have given me a great introduction to Tucson, the surrounding mountains, and numerous National Parks in the vicinity of the city. One of the highlights was a visit to the National Historic Landmark, San Xavier Mission. The Mission was founded in 1692, although construction of the current church only began in 1783.

What was I thinking? The First Fleet hadn’t even set sail for Australia in 1783! By the time Captain Philip reached Sydney Cove in 1788, the building program for the San Xavier Mission was already five years old and would continue until 1797.

The oldest intact European structure in Arizona, the church’s interior is filled with the most amazing statuary and painted murals. Despite its age and designation as a historic landmark, it is still used as a working church, where Catholic Masses are held on a regular basis. 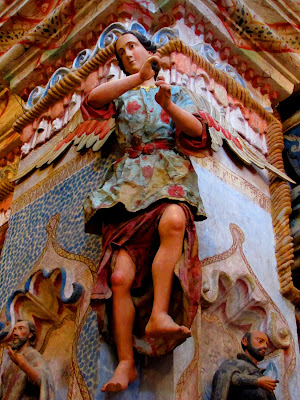 Image: One of the many amazing sculptures adorning the San Xavier Mission
Little is known about the people who decorated the interior of the church. It is thought that the artwork was most likely created by artists from Queretero in New Spain (now Mexico). The sculpture was created in workshops and carried by donkey through the Pimeria Alta to the Mission.

The San Xavier Mission is only about nine miles south of Tucson, just off of Interstate 19, and should be on every visitors list of places to see when visiting Tucson. As it is, some 200,000 visitors from all over the world come to see what is widely considered the finest example of Spanish Colonial architecture in the United States.

Surprisingly, there is no admission charge to visit the Mission, although there are donation boxes situated within the church which every visitor should contribute to.
Posted by Jim Lesses at 1:20 PM