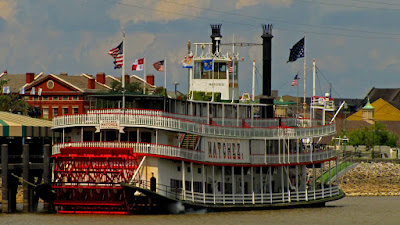 Image: The paddle wheeler Natchez…
I don’t do humidity well at all, and unfortunately, every time I stepped outside of my New Orleans hotel room at the Parc Saint Charles, that is exactly what I was hit with. A wall of oppressive heat had blanketed the Crescent City, and there was no escaping it if you were going to get out and see anything, so I just had to sweat it out like everyone else and get on with it.

Clearly three nights and days were nowhere near enough to explore this amazing city, but it’s all I had time for. I took a cruise on the Natchez, which is the only true steam driven paddle wheeler still operating out of New Orleans. The two hour cruise, complete with commentary above decks, and a jazz pianist below, takes you some two miles up river to explore some of the more interesting features of the third busiest harbor in America.

Unlike New York harbor, where most merchant ships berth well away from Manhattan, a steady flow of shipping is constantly making its way through New Orleans 150 miles up the Mississippi to Baton Rouge, or some 95 miles back down the shipping lanes to the Gulf of Mexico. Ships can only navigate the river with the assistance of licensed river pilots who are in a sense the direct ‘descendents’ of the old river boat pilots, which once included the author Mark Twain.

From the deck of the Natchez, damage from Hurricane Katrina is still visible along many parts of the shoreline, despite the five years since that storm hit. However, there is little in downtown New Orleans to indicate the extent of the damage the city suffered when the levees gave way in August 2005.

The Superdome, which served as a makeshift shelter for thousands of displaced people is of course fully functional. In fact, in one of those happy serendipitous moments that can occur when you travel a lot, my visit coincided with the start of the National Football League season across North America, and I was soon caught up in the hoopla that surrounded the first game between the New Orleans Saints, and the Minnesota Vikings (for the record, the Saints won 14-9).

This gave me an opportunity to see my first major parade, complete with sports stars, marching bands, an air force flyover, brief performances by Taylor Swift and the Dave Matthews Band, and thousands of celebrating NFL fans.
… 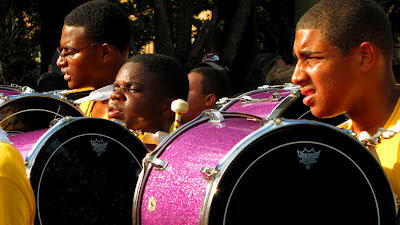 Image: Not for the fainthearted, the heat and humidity testing even the fittest…
Of course, I also went looking for some of that famous Cajun cooking New Orleans is famous for. I can definitely say the Gumbo is a real winner, with Jambalaya coming in a close second. I also lunched on a catfish Po-Boy, a large bread roll stuffed with salad and crumbed catfish (with fries on the side).

There are countless stories as to the origin of the term po' boy. One theory claims that "po' boy" was coined in a New Orleans restaurant owned by Benny and Clovis Martin, a former streetcar conductor. In 1929, during a four-month strike against the streetcar company, Martin served his former colleagues free sandwiches. Martin’s restaurant workers jokingly referred to the strikers as "poor boys", and soon the sandwiches themselves took on the name. In Louisiana dialect, this is naturally shortened to "po' boy." 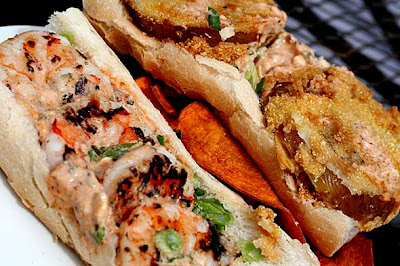 Image: New Orleans Po-Boy… [source: internet…]
Then there are the famous French pastries that visitors and locals rave about – and the most famous of these are the French-style doughnuts called, Beignets (pron: bin-yay). More than one person told me the best beignets in New Orleans were to be found at the Café Du Monde, and who was I to challenge that?

The original Café Du Monde Coffee Stand, at 800 Decatur Street, was established at the upper end of the New Orleans French Market in 1862. Since then it has been serving its chicory flavored café au lait and French-style beignets 24 hours a day, 7 seven days a week, except for Christmas Day and when "the occasional hurricane passes too close to New Orleans."

Beignets were brought to Louisiana by the Acadians. These were fried fritters, sometimes filled with fruit. Today, the beignet is a square piece of dough, fried and covered with powdered sugar. The French-style doughnuts are served in orders of three at Café Du Monde. [Source: Café Du Monde website…]

I can’t say I was blown away with my first beignet, but by the time I got to my third one I was warming to them in a pleasant sugar high kind of way.

I paid a visit to the Louisiana State Museum on Chartres Street, and enjoyed a look through their extensive exhibitions. Of particular interest was the exhibition Unsung Heroes: The Secret History of Louisiana Rock n Roll, which documents the contribution musicians from Louisiana have made to that genre.

I could write much more, and may return to the topic of New Orleans at a later date, but as I said at the start of this piece, three days is nowhere near enough to even get a decent feel for the city, let alone a good understanding of the people who call it home.
Posted by Jim Lesses at 4:53 AM