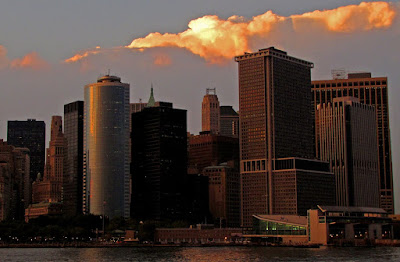 So what is a man to do on his last night in New York City? Of all the hundreds of potential activities I could have chosen to do, I decided to go for an evening walk to Fort Tryon Park, which is just 10 minutes from the Washington Heights apartment I have called home during my New York stay.

The park is also the location of the Cloisters, that fantastic branch of the Metropolitan Museum of Art (see The Cloisters: Fort Tryon Park), and it is literally the highest natural feature on the island of Manhattan. Massive walls of schist, the bedrock underpinning all of Manhattan’s buildings, push high out of the lush landscaped gardens, and large areas of natural land formations that make up the park.

Wide paths wind their way high above the broad flowing waters of the Hudson River. It is the perfect place to promenade with your partner, set up a camera for a sunset shot, have a picnic, jog, walk the dog, play ball with your kids or friends, watch tugboats push barges up river, or simply relax and contemplate life in general, and life in one of the most exciting and vibrant cities in the world.

The ever present thrum of traffic rises up from the Henry Hudson Parkway, which follows the contours of Fort Tryon Park and further along, Inwood Hill Park. In the distance, the George Washington Bridge is silhouetted against the evening sky, its fourteen lanes channeling thousands of vehicles an hour between Manhattan and New Jersey.
… 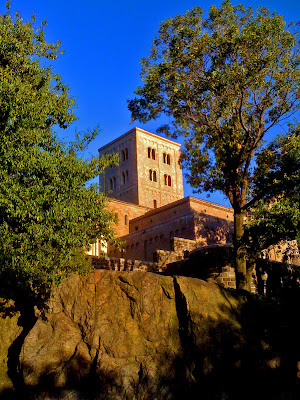 Image: The Cloisters standing tall on Manhattan schist
My stay in New York has been a real pleasure. I could have done without the heat and humidity of July and August, but since everyone else in New York had to put up with the same conditions, there was nothing for it but to head out and make the best of a less than perfect situation.

From New York I head to Greece for an extended stay of… who knows how long. It could be a month or it could be three. I hope to use Greece as a base for forays into Europe and even into Asian Minor (do they still call it that?). I have so much still to write and document about my U.S. visit, that I don’t know when I will get time to do that. My impressions will filter out over the next weeks and months, and hopefully will still be as interesting then as they were when I was experiencing them for the first time.

A friend of my cousins in Tucson, Arizona asked during my stay, what I thought of Americans and I guess by implication, America. For the record, I can honestly say, I have not had a bad experience during my three month stay, nor during my two month visit in 2008. I have not met anyone I couldn’t get along with, and in fact, I have made several new acquaintances who I hope over time will turn into good friends.

It is almost impossible to pick a favourite moment out of all the great experiences I have had during my stay. While New York tends to overwhelm the senses, the Grand Canyon overwhelms the soul and should be on everyone’s ‘bucket list’ – you know, that list of things you’ve always wanted to do before you ‘kick the bucket’!

I have still to write about my trip to Grand Canyon, but for the record let me state that two nights and a day and a half are nowhere near enough to fully soak up this true Wonder of The World. Instead of crossing the canyon off my list of places to visit, I have left it firmly in place, since I have every intention of returning for a longer, more appreciative stay.
… 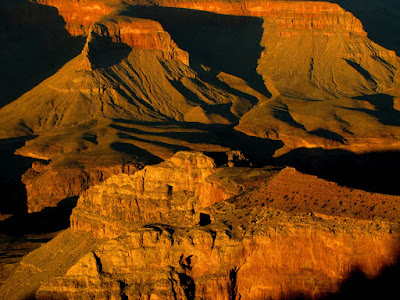 Image: Sunset over the Grand Canyon

Most of all though, it was the opportunity to strengthen family ties that helped make this stay extra special. I have had a chance to meet some American cousins and their children and partners (most for the first time), and those family connections have been a real joy to make. To Patris and Tom in Philadelphia; George and Jan in Raleigh, North Carolina; and to Mary and George (and George Mc) in Tucson, thank you all for your overwhelming generosity, your open arms and warm welcomes, and your delightful hospitality.

I’d especially like to thank Chris and Judy for giving me the opportunity to stay in their apartment in return for caring for their two cats and plants, collecting the mail, and providing a deterrence of sorts to potential ne’er-do-wells who could see by my presence that the apartment was being occupied and watched over.

Let’s do it again some time.