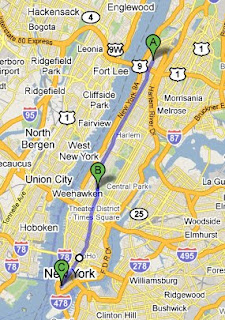 ~ I went for walk today covering a total distance 8.1 kilometres in just under 90 minutes.

While I was out I had a crazy idea to walk Manhattan. I decided that on at least one occasion I would try and walk the whole of Broadway (or at least from 187th Street and Broadway down to Bowling Green where the famous Charging Bull is located), since Broadway runs pretty much the full length of the island.

I mapped it with Google Maps and the total distance is 18.3 kms. According to Google Maps it could be done in 3 hours and 44 minutes of continuous walking, although I don’t know how they arrive at that figure. However, it seems about right given that it took me 90 minutes to walk 8kms. Double those numbers for 16 kms in 3 hours, and there you have it. Heck, I’ve still got 44 minutes to walk the last 2.3 kilometers.

And I’ll probably need every one of them!

Starting at Public School 48 (at 4360 Broadway, not far from where I’ll be staying), the route will take me past Columbia University; the Malcolm X & Dr Betty Shabazz Memorial; close to the Cathedral of Saint John the Divine; the Children's Museum of Manhattan; the Beacon Theatre; Lincoln Center for the Performing Arts; and into Columbus Circle.

From Columbus Circle I’ll head down into Times Square, and on down Broadway to the Flatiron Building at E 23rd and Broadway. Here I will be on familiar ground, having walked this area extensively during my New York stay in 2008. Ignoring the Barnes & Noble book store in Union Square I’ll continue on to The Strand Book Store at 828 Broadway (www.strandbooks.com). On their website they claim to have 18 miles of books, and who am I to dispute this?

Down, down Broadway I’ll go. Past Greenwich Village, the Bowery, Tribeca, Little Italy and the neighbourhood that has all but swallowed it up - Chinatown. On through City Hall Park (looking out for the Brooklyn Bridge), past the Woolworth Building, St Paul's Chapel, and down past Wall Street until finally I reach the Charging Bull.

There can’t be too many visitors – or New Yorkers for that matter – who can say they have walked the length of Broadway. At the very least I will walk down to Columbus Circle, a distance of 10.4 kms (according to Google Maps), which is certainly doable.

Having completed the walk, I then have to walk back up Broadway to Fulton Street, and find the Broadway-Nassau Street subway station. Jumping on the A train, I’ll ride it all the way back to 181st Street station, stagger home, have a hot shower/bath, and go to bed.

I reckon I’ll deserve it.

And I know I will definately need it.