One week every June, over 100,000 creative and cultural trendsetters converge in Brooklyn to uncover the future of music, innovation, and content with over 300 bands, 150 speakers, and 100 content creators.

The Northside Festival encompasses a constellation of venues – small clubs, outdoor spaces, boutique hotels, and more. A single day might include discovering your favorite band, the next big startup, or the best visual content you’ve experienced all year.

Block Party
On June 10-11, Williamsburg’s main drag Bedford Avenue will transform into a public park (from Metropolitan Avenue to N 12th Street). Temporary wall units, interactive installations, and eye-popping sculptures will be staggered throughout the blocks.

Bedford Avenue is always rocking in the summertime, but never before like this! Jameson Music is proud to be showcasing promising artists on the Sine Metu Stage, bringing new sounds from across the U.S. to Northside Festival. Swing by between 2-6PM on Saturday and Sunday for performances by Jameson Music artists including Eve & The Exiles, Julia Haltigan, J-Council, HONEYHONEY, Cha Wa and Kristin Diable, plus other Northside favorites. 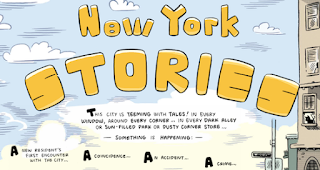 New York Stories
New York City is teeming with tales! In every window, around every corner, in every dark alley or sun-filled park or dusty corner store, something is happening. I loved the way the latest New York Times Magazine has taken ten news articles from the paper’s extensive archives into turned them into illustrated stories, or comics.

The magazine partnered with The Times's Metro desk to tell these stories in an innovative way: Through a series of comics drawn by some of the best illustrators in the business. Dive into this year's New York issue here…
=====
New Ferries Take to New York Harbor 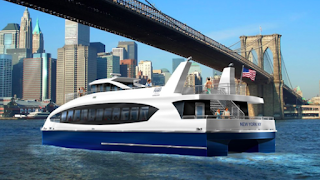 New York City’s new NYCFerry service which has now begun transporting passengers around the city’s great harbor. The service, with six lines, will eventually link Manhattan, Queens, Brooklyn and the Bronx along the East River.

Ferries on two of those lines — the Rockaway, Queens, route and the existing East River route — are up and running, with the South Brooklyn and Astoria routes expected to follow in August, and the Lower East Side and the Bronx routes in the summer of 2018.
A one-way trip will cost $2.75, the same as a subway ride. For $1 more, you can bring your bicycle onboard. (You can also purchase a 30-day pass.)

All routes have battery-charging stations and concession stands, and Wi-Fi is on its way, too.

The East River route:
The ferry will still make stops at East 34th Street in Midtown Manhattan; Hunters Point South, Greenpoint, North and South Williamsburg and Dumbo in Brooklyn; Governors Island; and Wall Street/Pier 11 in Lower Manhattan. So what's new? There will be an additional vessel, which means more frequent service.

Check out all the routes and schedules here…
Download the NYC Ferry app to check schedules, purchase tickets, and learn more.
=====
The Sounds of ‘Mannahatta’

At Left: Collect Pond Park in 1609. Collect Pond Park at Lafayette and Franklin Streets was once a five-acre basin in the 1600s, as shown in “Calling Thunder: The Unsung History of Manhattan.” By DAVID AL-IBRAHIM and BILL MCQUAY. Publish Date: April 25, 2017.

It seems that visitors to New York have been complaining about the level of noise for a long time. Writing for the New York Times, JIM DWYER  notes that in 1748, a Swedish-Finnish naturalist, Peter Kalm, complained about the nightly chorus of the Manhattan’s frogs, writing, “They frequently make such a noise that it is difficult for a person to make himself heard.”

So vibrant was natural life in New York before European settlement, the city could have become “the crowning glory of American national parks,” Eric W. Sanderson of the Wildlife Conservation Society wrote in “Mannahatta: A Natural History of New York City.”

Even today, Dr. Sanderson said in an interview, our modern eyes can glimpse remnants of the landscape of 1609, when Henry Hudson sailed into the harbor, at places like Jamaica Bay, Inwood Hill Park and Pelham Bay Park.

“What you can’t ever find is the sound of what it was like,” Dr. Sanderson said.
Until, perhaps, now.

Free Summer Movies…
The free summer film series have already begun, but be quick, you might miss out on La La Land, Life of Pi, Mad Max: Fury Road, The Lego Batman Movie, The Big Lebowski, Blazing Saddles, Rogue One: A Star Wars Story, The Muppet Movie, Logan, The Secret Life of Pets, Finding Dory, Selma, and Hidden Figures, just to name a baker’s dozen from the extensive smorgasbord on offer.

Free Summer Concerts…
You can hear live music of all kinds across the City without spending a dime. From punk on Staten Island, to indie rock on the Manhattan waterfront; from classy nights outdoors with the Metropolitan Opera, to a diverse lineup of jazz and world music at SummerStage and Celebrate Brooklyn!, there is surely something for everyone.