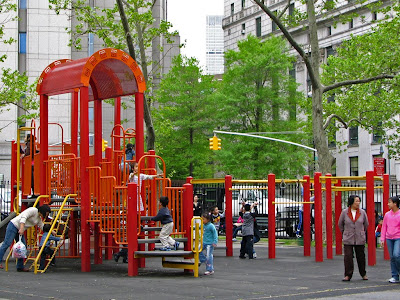 It was Saturday, May 10, the eve of Mother's Day 2008 (or maybe it was in fact Mother's Day in the US that day), when I just happened to be wandering through the heart of New York's Chinatown area - centred around Columbus Park. The park was packed with Chinese-Americans of all ages enjoying a beautiful spring day.

Groups of older Chinese sat at tables playing cards (generally, women), while the men seemed to favour several types of Chinese board games which were totally unfamiliar to me. Others were dancing to the music and singing of a female Chinese performer in a pavilion at one end of the park. Elsewhere, a small group of elderly men sat in a semi-circle playing traditional Chinese instruments in what appeared to be an Oriental jam session. Scores of young children accompanied by their escorts played in the large playground incorporated into Columbus Park.

I hung around for an hour or so, soaking up the music and atmosphere, and marveling at the diversity that makes New York what it is today - that great melting pot that constitutes modern America.

I've also put together a short video made of up footage I shot during my brief time in Columbus Park. On the soundtrack you can hear (and see) the female performer singing in the pavilion, and also get glimpses of the 'jam session' taking place at the same time.