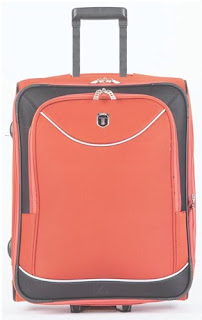 ~ Yesterday, I bought a new piece of luggage in preparation for my travels next year (see image).

It is a 54cm ‘Jet Stream’ bag from Tosca. That’s right, folks, 54cm. That is less than two feet high for those of you still using Imperial weights and measures. Anything smaller, and I would be restricting myself to carry-on luggage only!

I have written before on this blog about the concept of travelling light, and next year I hope to put my own advice into practise. As I said in an early post on House Sitting, I will be looking after a house for six weeks in Melbourne early in the new year, and I am using it as a practise run for my packing skills before I fly out to Europe in April or May.

I figure if can pack light enough to survive six weeks in Melbourne, I won’t need to pack anything extra for my European trip.

I should point out that I will also have a small carry-on backpack which will hold all my non-wearable gear such as camera, laptop computer, battery chargers, and other associated paraphernalia. I will also have a small ‘man bag’ – actually an old laptop computer bag for those extra items one always needs on long haul flights (water, ear plugs, reading material, etc).

Last year I used the 71cm version of the bag you see illustrating this post – as well as the backpack, and let me tell you, folks, a full 71cm bag is a pain in the back (not to mention the @ss) to drag around London, New York, Athens and the Greek islands!

I vowed that never again would I take such a large bag with me on my travels, and so the baby of the set, the 54cm piece will hopefully do the job for me. I say, ‘hopefully’, because I honestly don’t know if it will be enough, but then, one of the benefits of my six week house sitting gig is that it gives me the opportunity to fine tune my packing before I depart for Greece and beyond.

When I do eventually head off to Melbourne, I will post a complete packing list on this blog just so you can see what I have selected. Once the house sit is over, I will again post an entry letting you know what worked and what didn’t.
Posted by Jim Lesses at 10:01 AM