In Review – The Texas Cowboy Cookbook 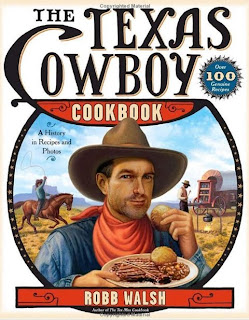 ~ As a child growing up in the 1950s and 60s, my world was filled in part with stories and movies depicting the exciting life of the American cowboy.

From Hopalong Cassidy and the Lone Ranger, to Saturday afternoon cowboy serials at my local cinema, and television series such as Gunsmoke, Bat Masterson, and even The Cisco Kid, the American west was as much a part of my suburban Adelaide upbringing as it was for a child in New York City. And yes, I too played ‘Cowboys and Indians’ after school, and had to take my turn as one of the Indians who invariably ended up getting shot by my best friend whose turn it was to be “the fastest gun in the west”.

Which brings me to Robb Walsh’s wonderful 2007 publication, The Texas Cowboy Cookbook, and which, despite its title, is more than just a book filled with western recipes.

I think it is fair to say that I’ve learnt more about the history and the life of cowboys from this cookbook, than anything else I’ve read so far on the topic, which may seem strange when you think about it – but then I haven’t read too many histories of the American West, and anyway, this is no ordinary cookbook. Not when the cover proclaims that The Texas Cowboy Cookbook, is “A History in Recipes and Photos.” And what a history it is.

The boom years of the American West occurred after the American Civil War – from 1866 to 1886, a period of just 20 short years. Almost everything we think we know about the West: the myths and legends, the Indian wars and the cattle trails, the gunfights and the outlaws, stems from this period.

The Texas Cowboy Cookbook is divided into ten chapters, each beginning with historical information examining the chapter’s theme. For example, The Texas Cowboy Myth, examines the background to the myths surrounding the American West, and the methods used to transform what was a tough, hard, dangerous life on the American frontier into the stuff of legends.

One of the greatest myth makers was Colonel William Cody, more popularly known as “Buffalo Bill”. Cody, who was in fact an army scout and real life Indian fighter, caused a sensation whenever his ‘Wild West Shows’ toured the big cities along the Eastern seaboard, and brought some of the flavour of the west to well-healed city slickers. It was “Buffalo Bill’s Wild West Shows” that apparently invented the ‘circling the wagons’ myth that became a staple scene in many early Hollywood Westerns.

In Los Vaqueros, we learn more about the influence of the Spanish on the American West. In fact, throughout the book, Robb Walsh constantly explodes another great Western myth – the one that almost universally depicts Mexicans as greasers, bandits and outlaws, and relegates their contribution to the periphery of cowboy mythology, or as mere footnotes (if that).

For me, chapter 6, Black Cowboys, was the most surprising section of the book. Again, Walsh explodes the myth that the American West and the cowboys that rode it were always tall, fair-haired, blue-eyed and white. There were plenty of Anglo cowboys of course, but as the book points out: “…Texas cattle-raisers also included Spanish vaqueros, black slaves, former slaves and free people of color, Cajuns, Creoles, and immigrants freshly arrived from Mexico, England, Ireland, and Scotland, as well as other parts of the United States.”

While the exact number of African American cowboys will never be known: “The contention has been made that as many as 40 percent of all Texas cowboys were black.” Walsh writes that this claim depends on who is doing the counting. However, Walsh also writes that “By 1860 there were 180,000 slaves in Texas, 30 percent of the state’s population.”

It should come as no surprise then, that when the Civil War ended, many of the freed slaves continued to work as cowboys throughout the South and in Texas in particular.

And so to the diet of the American Cowboy.

If you thought the typical cowboy diet consisted of not much more than beans and beef, you would of course be wrong. Again The Texas Cowboy Cookbook illustrates, in more ways than one, that the western diet was influenced by a wide range of cultures and ingredients. From “…the wild game and goats preferred by the Spanish herders of the late 1700s, to the black Southern cooking of slaves and free people of color who worked as cowboys on East Texas ranches beginning in the early 1800s.”

The end of the Civil War also saw the arrival of bulk supplies of foodstuffs into the West. Now staples such as flour, coffee and lard were easy to come by. The advent of canning also saw a wide variety of foods (especially canned fruits) become available to cooks for use in recipes along the various routes used for extended cattle drives.

The Texas Cowboy Cookbook presents over 100 “genuine” cowboy recipes, as well as a selection of newer Western recipes created by modern cooks in what Walsh (in his final chapter) refers to as “The New Cowboy Cuisine”.

Starting with a look at the different types of chiles (including Anaheim, Poblano, Jalapeño, Serrano and Pequin – and their variants), Walsh takes the reader through ways to roast, grind, and make various chili sauces and salsas for year round use. In West of The Pecos we learn how to make a sourdough starter that can be used to make a continuous supply of sourdough pancakes, biscuits, hamburger buns, and more.

Having got the seasonings and the sourdoughs out of the way, the cookbook tackles the recipes proper. Everything you expected and a whole lot more is presented to the aspiring cowboy chef.

From Chili con Carne, to Chili con Queso; from Cinnamon Chicken to Green Gumbo with Fish; from Fried Green Tomatoes to Mexican Pot Roast. There are meat recipes aplenty: chicken, venison, pork and beef spare ribs, tenderloin steaks, and patties. You get soups and stews; corn bread, okra, and fatback; desserts like buttermilk-lemon pie, peach cobbler, and butter pecan ice-cream. There are noodle, rice, tomato, and onion dishes. And there are salads, sausages and sweet potato recipes. If you can’t find something to satisfy the hunger inside, you are not looking hard enough.

To end this review I will include just one recipe - for Cowboy Coffee. I look forward to the day when I’m watching a Western in my local cinema, and see the ‘cowboys’ make coffee this way – with water, coffee and a raw egg.

Wayne Walker’s Cowboy Coffee (makes 8 cups)
Wayne Walker’s technique for settling the grounds of coffee is to drop a whole raw egg into the coffee and stir it gently. It’s actually similar to the technique used by French chefs to clarify stock. Just don’t eat the egg.

8 heaping tablespoons medium-ground 100 percent Arabica coffee
8 cups spring water
1 raw egg
METHOD: In a metal coffeepot over medium heat, add the coffee to the water. Bring just to a boil and then reduce to a simmer (or move the pot to the side of the campfire) for a few minutes, or until strong enough. Break the egg into the pot and stir gently, being careful not to break the yolk. Wait at least 5 minutes without disturbing the pot. Pour carefully.

The Texas Cowboy Cookbook is generously illustrated with period black and white photographs and drawings, and includes a useful Resource Guide for readers wanting to find out more via the Internet. There is also a good Bibliography and a comprehensive Index.

The Texas Cowboy Cookbook, is worth reading for the historical information alone, but of course, if you want to try your hand at genuine old west recipes, the cookbook is the perfect place to start. So strap on your chaps, clear some space in the kitchen – or dig a fire pit in the back yard – and start cookin’. Yee-haa!

Click link to purchase The Texas Cowboy Cookbook: A History in Recipes and Photos

or click link below to purchase book direct from Amazon.Com…

You can also purchase Robb Walsh’s The Tex-Mex Cookbook: A History in Recipes and Photos

and Legends of Texas Barbecue Cookbook: Recipes and Recollections from the Pit Bosses

Image courtesy of Amazon.Com
Posted by Jim Lesses at 8:24 AM