The Charm of Broadway 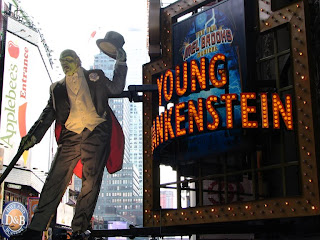 We always leave a beloved place in order to return to it sometime. Broadway in is such a place for me, and I return to it as often as I can. Sometimes, I take a flight to JFK or to the La Guardia Airports and then a taxi to a hotel in as close to or in Broadway; at other times, I return to it in my heart and in my writings.

Broadway has inspired many poets. Of the old school, Sandburg has the pessimistic look when he says: "Hearts that know you hate you/... Cursing the dreams that were lost / In the dust of your harsh and trampled stones." Walt Whitman's excited and dynamic words describe more of what I feel about this parcel of : " Florid with blood, pensive, rapt with musings, hot with passion, /Sultry with perfume, with ample and flowing garments." In fact, Broadway is and has been the theatre district not only for the but possibly for the entire world

Broadway, today, extends from the to the 56th, on the east and the west of the avenue called Broadway with at its core. Broadway is most famous for its stage shows. The longest running Broadway shows to date are The Phantom of the Opera, Cats, Les Miserables, A chorus Line, Oh! , Beauty and the Beast, and Rent.

Broadway's becoming a theatre district goes far back to the time before the Revolutionary War. In mid-eighteenth century when two actors wanted to bring the staging of the plays of Shakespeare to , the seeds of Broadway were sown. The first theatre in was in . Later on, P.T. Barnum operated an entertainment complex at Broadway and . During the first few years, a variety of shows entertained the working and the middle classes. When the Astor Place Theater opened, these theatre goers rose in a riot, objecting to the upper class audiences.

The first performance that added dance and music to a play was The Black Crook, in 1866. Its duration was five and a half hours. This musical attracted so many audiences that musicals became high quality entertainment. At the turn of the twentieth century, some of the earliest musicals were Cakewalk, George Washington Jr., A Trip to Coontown, The Fortune Teller, Little Johnny Jones, and 45 Minutes from Broadway.

Twentieth Century brought Babes in Toyland, Naughty Marietta, and The Red Mill. Since colored lights did not last long, white lights were used at the time; thus, Broadway took the nickname "The Great White Way."

The advent of the motion picture industry and the Actors Equity Association strike were feared to bring a halt to Broadway; quite the contrary, during the roaring twenties, Broadway flourished and added serious drama to its light-hearted repertoire and Ziegfeld revues. was the first such hit. At that time, Noel Coward, Rudolf Friml, Sigmund Romberg produced memorable work alongside with the eternal Cole Porter, George Gershwin, Jerome Kern, and Rodgers and Hart.

Then, in 1947, Tony Awards were established to recognize the best performers and performances of the American Theater and especially Broadway. Nowadays, most shows are made for profit by the many theatre establishments in the area, although some are produced by non-profit organizations such as the Roundabout Theater Company, Manhattan Theater Club, and The Lincoln Center Theater. On the average, musicals run longer than non-musical plays, and some of the successful musicals and plays go on tour to other cities in the off season or after their curtains close on Broadway.

Besides the Broadway theatre district, smaller Off Broadway theatres that are located between 57th and 72nd Streets offer less publicized, less expensive, yet more experimental and daring plays. Sporadically, a successful Off Broadway show will later run on a Broadway stage. Rent, Little Shop of Horrors, Godspell, Chorus Line, and Sunday in the Park with George are among such works.

Broadway shows' greatest rival today is the television. The finest plays and musicals and the most talented theatre actors have to compete with the corniest TV shows for audience recognition, mainly because of the high cost of the tickets and the amount of people a theatre can hold. Watching a live stage show, a serious play, or a musical is a great thrill that cannot be matched by the movies or the television.

For me, the streets of Broadway add to the dash of its theatres, musicals, comedy clubs, and movie houses. Broadway and Times Square is where I can walk in and out of two to five-star hotels, coffee houses like the Starbucks, diners and gourmet restaurants; or where I can browse inside all kinds of shops but especially gift shops that sell theatre paraphernalia such as costumes, masks, and props; or I can stroll and absorb the excitement of other pedestrians, the street-corner preachers, and the lights of the establishments while I watch the limousines bringing actors to performances and actors signing autographs in front of the theatre buildings, or an occasional scalper selling last minute tickets to shows with the corner of his eye guarding the whereabouts of the police.

Like Whitman, I too, "arising, answering, descend to the pavements, merge with the crowd, and gaze," because with all its coquettishness, Broadway makes life turn around our drama of existence.

Joy Cagil is an author on http://www.Writing.Com/ which is a site for Writers.