In Review: Down Under, by Bill Bryson 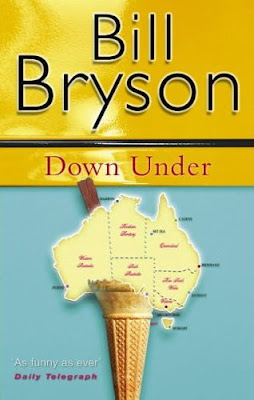 I’ve got two weeks to read as many books as I can squeeze in – in between writing, surfing the internet, swatting errant flies, drinking cups of coffee, and serving the occasional customer.

I’ve decided to start with Bill Bryson’s, Down Under (2000, Doubleday). Yes, I know I’m nine years and about a million readers late, but then better late than never, as the early adopters might say.

It is always interesting to read other people’s thoughts about the country you live in. You generally find the things that matter to you the most, are often the things others find least interesting. Or to put it another way, the things you take for granted; those things you live with everyday, and often never give a second thought to unless you have to, are precisely the things others find the most fascinating.
Things like the kangaroo, the platypus, koalas, wombats and echidnas just for starters. Then there are some of the deadliest snakes on the planet, sharks, fresh water crocodiles, funnel-web spiders, box jellyfish, and the blue ringed octopus.

The other pleasure is discovering the wealth of interesting information writers like Bryson, are able to uncover during their research, which they subsequently include in their books.

For example, until I read Down Under, I didn’t know that the Simpson Desert was named – in 1929 or 1932, depending on the source you choose – after Alfred Simpson, a manufacturer of washing machines. Say, What? Apparently Simpson funded an aerial survey of the area and as a result had the desert named in his honour!

Thanks Bill, I will never look at my aging Simpson washing machine in the same way again.

“Two of the leading explorers of the nineteenth century were called Sturt and Stuart and their names are all over the place, too, so that you constantly have to stop and think, generally at busy intersections where an instant decision is required, ‘Now do I want the Sturt Highway or the Stuart Highway?’ Since both highways start at Adelaide and finish at places 3,994 kilometres apart, this can make a difference, believe me.”

He is right of course. And since I live in Adelaide myself, I must make a mental note of that to ensure I don’t end up in Alice Springs the next time I want to drive to Sydney.

I was delighted to find that Bill Bryson and I share a common interest, and that is the habit we both have of buying the local paper of whatever city or community we are passing through. As Bryson says:

“What a comfort it is to find a nation preoccupied by matters of no possible consequence to oneself. I love reading about scandals involving ministers of whom I have never heard, murder hunts in communities whose names sound dusty and remote, features on revered artists and thinkers whose achievements have never reached my ears, whose talents I must take on faith.”

The more I read, the more I liked Down Under and it’s very observant author. In a recent post on this blog titled, Something About The Light I wrote, “There is something about the late afternoon light that seems to be uniquely Australian.” Of course, it is presumptive of me to assume the Australian landscape has a monopoly on the uniqueness or otherwise of light, but Bryson also makes observations about the light while driving along our country roads.

“Do you know how sometimes on very fine days the sun will shine with a particular intensity the makes the most mundane objects in the landscape glow with an unusual radiance, so that buildings and structures you normally pass without a glance suddenly become arresting, even beautiful? Well, they seem to have that light in Australia nearly all the time.”

One of the things Bill Bryson is noted for is the humour he brings to his writing. He seems to have the ability to see the funny side of a nations many quirks and foibles, and Australia is no different. His description of listening to a cricket match while driving from Sydney to Adelaide, is one of the funniest I have ever read.

I won’t try to quote from the book since that would spoil the fun for you, if you are yet to read Down Under yourself. Suffice to say that I had to put the book aside because I was laughing so uncontrollably.

Bill Bryson was born in Des Moines, Iowa, and after living for many years in Britain with his English wife and four children moved back to America. He is the best selling author of The Lost Continent, Made in America, A Walk in the Woods, and many other great travel books.

If you haven’t read Bryson’s Down Under you should put it on your reading list now. Despite the fact that it was published in 2000, it has never been out of print, so you will have no trouble finding a copy, either in your local bookshop, online shop of choice, or good secondhand book resellers like the Book Box.