The Beat Below The Street 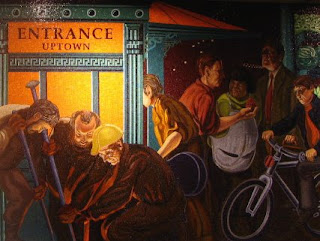 ~ One of the real pleasures of my two month stay in during 2008, was the wonderful encounters with musicians playing on the subway system.

Some musicians accompanied themselves acoustically; others were able to plug in and perform electrified; while still others sang karaoke style to CDs plugged into portable players. Without exaggeration, all were universally good, some were great, and a few were outstanding.

I had to admire their fortitude and their ability to continue singing in the face of constant noise, fumes, dust, apathy, screeching subway train brakes, public address announcements, and the ebb and flow, and push and shove of thousands of commuters. It takes real determination and staying power to persist with your music and performance while all is in flux around you. Gear has to be humped up and down stairwells; depending on the season, hands and fingers may be numb with cold, or constantly wet with sweat; in addition, hours of singing above the constant noise can damage vocal chords, and lead to major problems if not monitored daily.

Which brings me to Steve McGookin, and his blog The Beat Below The Street.

Steve is an out of work journalist (and musician), who has decided to keep himself occupied by documenting his experiences busking on the passageways and platforms of the subway system. Steve writes:

“I’m planning to play on the platform for a while to get a sense of what the city's buskers face every day and be able to tell their stories a little better. Then, for the price of a Metrocard, I’ll go wherever the music leads me; I’ll talk to the musicians it leads me to and I’ll introduce them to you.”

To this end, Steve has set himself the objective of spending 48 days over summer performing on subways. Why 48? Simply because that’s his current age. As Steve says:

I’m guessing that as it goes on, every day will feel like a year, so I figured I’d do one day for every year I've been around just to remind myself how good it is to be alive and able to do this.

“But playing at the stations is just a starting point; I’m doing this, first and foremost, to be doing something creative and be telling stories again, but also to spread the word about some of the remarkable musicians who - in most cases - make riders’ days a little brighter.”

Steve McGookin is currently several weeks into his project, and is documenting his explorations underground as he goes. If you want to follow Steve’s adventures, visit his blog, The Beat Below The Street and either subscribe to his updates or signup to follow his posts (better still, do both). And if you are in reading this, look out for the man, and throw a couple of dollars into his guitar case.

I’m sure he will appreciate it – as will any other street/subway musicians you support in this way.