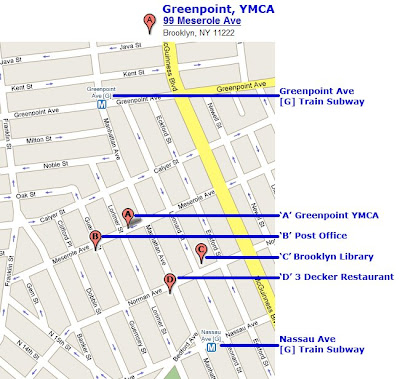 ~ This is the second of a two part extended review of the Greenpoint, YMCA in Brooklyn, New York. Click here to read the first part...
The original, shorter version of this review first appeared on the Trip Adviser website in April, 2008. At the time I was staying at another New York City 'Y', the North Brooklyn/Twelve Towns YMCA. Since I mentioned the Greenpoint 'Y' in a previous post, Cheap Accommodation in New York City, I thought I would include an expanded review here.

I moved into the Greenpoint 'Y' on Monday, March 17, 2008, and stayed for a full 28 days before moving out for two nights to the North Brooklyn/12 Towns YMCA in the neighbourhood of Cypress Hills. I then returned for a week, before moving back to North Brooklyn.
Having spent five weeks at the Greenpoint branch of the YMCA during March and April, 2008, I feel reasonably qualified to offer a review of the facilities, the staff, the location, and the surrounding area.

Now on to part two of my review.

Staffing
While I was there, the reception staff at the Greenpoint 'Y' were mostly young, bored, and showed little interest in who was visiting, from where, or for how long. Most of them were just going through the motions, and getting even a “Good morning,” or “Hi, how are you,” from them was a major achievement. If you have a Polish or Hispanic background, you may have a different experience to me, but from my perspective, the reception staff really let the Greenpoint YMCA down. Even after staying at Greenpoint a total of five weeks, the staff could never remember my room number or my name.

And no, I don’t expect Five Star treatment at a Two Star facility, but it would have been nice to have my presence acknowledged occasionally.
Note: I specifically mention the reception staff of the Greenpoint YMCA because 80 percent of my interactions with staff members was with them. I can offer not opinion of other staff except to say that all my interactions with cleaners and maintenance personal were brief, cordial, and incident free.

Location, Location, Location
Even though you have to change subway trains at least once to get to Manhattan, the Greenpoint 'Y' is perfectly located for quick and easy access to the heart of New York City.

By the way, the Manhattan 3 Decker Restaurant is just a block away (on the way to the Manhattan/Nassau Avenue station), at the corner of Manhattan and Norman Avenues.

Staying Connected
Apparently there is some sort of internet facility at the Greenpoint 'Y', but I didn’t make use of it, so I can’t tell you anything about it. However, if you need access to the internet (and in a wired world, who doesn’t?), I found the perfect solution.

A block and a half away from the 'Y', at the intersection of Norman Ave and Leonard Street (remember: the 3 Decker Restaurant is on the corner of Manhattan and Norman Avenues), you will find a local branch of the Brooklyn Library (location ‘C’ on the map). If you have a wireless enabled laptop, you can use the library’s internet connection for free. That’s right – Free. My understanding is that all public libraries (in New York at least), provide this service.

If you are not travelling with your own WiFi laptop, you can still use the computers at the library but will need to pay a small fee. Unfortunately, from what I could see there was a big demand for these computers, and users were only able to stay on line for 30 minutes at a time. Barely enough, in my opinion, to read and reply to emails. But at least it was cheap, and easy to get to.

Of course, if you travel with a laptop and have the right kind of provider, you can connect almost anywhere in the US, and it is getting easier by the day to do so.

The Neighbourhood
The highest concentration of Polish migrants in the whole of the United States is living in Greenpoint, Brooklyn. This is a fact – not a criticism. There are numerous Polish owned restaurants, bars, cafés, and shops and business of all descriptions in the area surrounding the YMCA. In fact every type of business is represented in the neighbourhood with the exception of cinemas.

I enjoyed exploring the neighbourhood, and learning about my surroundings, and if you have the time, I would encourage you to do the same. Manhattan does not have a monopoly on the action in New York City. There is plenty going on in Brooklyn as well.

US Postal Service
If you head one block down Meserole Avenue towards the East River, you will find a local branch of the US Postal Service on the corner of Meserole Ave and Guernsey Street (location ‘B’ on the map). If you need to send letters or packages home, this is the most convenient place to do it from.

Safety and Security
And finally… It doesn’t hurt that the 94th Police Precinct building is directly opposite the YMCA. The latest I returned to Greenpoint from Manhattan was around 2am. I never felt unsafe or under threat around the Greenpoint 'Y'. In addition, I never felt unsafe in the YMCA itself, or worried about having my room broken into or having things stolen.

Like any big city in the world (or small city for that matter), it pays to keep your wits about you and to not take any unnecessary risks. If you can do that and manage to stay out of trouble, there is no reason why your stay in New York can’t be one of the most exciting travel experiences of your life.

I have no hesitation saying it was just that for me, and I would happily stay at the Greenpoint, YMCA again if I got the opportunity.
Posted by Jim Lesses at 2:19 PM