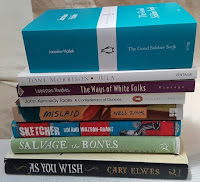 ~ I suspect that I am like most inveterate readers, in that I often have more than one book underway at any particular time. I don’t know why this is. What is it about some books that keep you glued to the page, reading late into the night, while others manage to keep you engaged for the first few chapters before your interest begins to tail off to the point you finally give up (though not completely), and you turn to that second or third book on your tottering pile of reading material stacked on the dresser next to your bed?

I also suspect that the comment about ‘not completely’ giving up is also true for many readers. Some half-read books sit next to my bed or on the bookcase in the lounge room for weeks and months, waiting patiently for my return. These books may not have the ability to keep me up late at night, but neither do they fall completely off my reading list. There is just enough of interest in the story they are telling to keep me on the hook, waiting for the right moment to take up the tale again.

I started out the month with Table Money, by Jimmy Breslin. I have mentioned Breslin in other posts, noting that to date I have bought eight of his books. Of these eight I have read four titles, and Table Money was going to be my fifth Breslin book.

Table Money recounts the story of several generations of ‘sandhogs’, a name adopted by the tunnel workers who toiled beneath the streets of New York City carving out the subterranean tunnels that brought fresh water to the great metropolis. All the Breslin trademarks are here—hard working, and even harder drinking working class immigrants; corrupt politicians and union leaders; brutal bosses and their meaner henchmen who stand over the immigrant workers ensuring they remain unorganised and un-unionised; and long-suffering wives and their under-educated children.

Despite the glowing praise for the book (“…a serious literary novel, a superior work of fiction.”—The New York Times; “…a heavyweight saga in an era of welterweights,”—Los Angeles Times; and “…easily Breslin’s best novel.”—Library Journal), I found the going tough and put the book aside around a quarter of the way through.

Last week I bought J.D. Vance’s much acclaimed memoir, Hillbilly Elegy. Subtitled, A Memoir of a Family and Culture in Crisis—the ‘culture in crisis’ being that of white working-class Americans. James David Vance grew up in the Rust Belt city of Middletown, Ohio, and the Appalachian town of Jackson, Kentucky. His grandparents were “dirt poor and in love,” and moved north from Kentucky to Ohio to escape the endemic poverty that surrounded them in Jackson.

They raised a middle-class family, which eventually included the author who went on to graduate from Yale Law School, and who has now written a timely book that may provide some of the answers to the many questions being asked about the rise of the alt-right in America and the unexpected rise of Donald Trump to the Presidency of the United States.

Again, despite my interest in America and American politics, and despite the fact that I was settling into the book quite comfortably, I somehow managed to distract myself by working on entries for this blog, and by the other general reading that I do. And then, wouldn’t you know it, before I could get back to Hillbilly Elegy, along came Aileen Wournos.

Wournos was one of those atypical phenomena that thankfully come along all too rarely, that is, a female serial killer. I had seen and been greatly moved by the 2002 film, Monster, in which Charlize Theron portrayed Wounos with a stunning Academy Award winning performance that would earn her an Oscar for Best Actress—so when I saw the eBook being offered at a discount for just USD$1.99, I jumped at the chance to buy it.

Joseph Michael Reynolds was a journalist for Reuters at the time Aileen Wuornos was embarking on her late-1980s killing spree, and it was Reynolds who first broke the story in the national media. First published in 1992, Dead Ends traces the story of Wuornos, a person who might have fitted very well into J.D. Vance’s book as just another of the millions of down on their luck working Joe’s with few prospects, and even fewer options for escaping the hole they had found themselves in. Holes, it should be said, that they mostly dig themselves.

Here at last is a book that has managed to keep me up at night. As I write, I am down to the final few chapters, and with less than an hour or so of reading remaining, I will finish the book later today. I will then make my way back to Hillbilly Elegy, and before the month is out, I will take another look at Jimmy Breslin’s novel. Having said that, there are dozens of other books straining for my attention, and any one of those might win out over Table Money or for that matter Hillbilly Elegy.