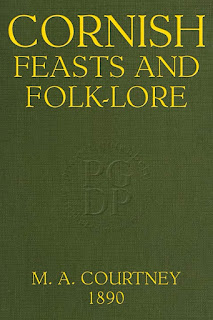 But first a riddle…
“As I went over London bridge
Upon a cloudy day,
I met a fellow, clothed in yellow,
I took him up and sucked his blood,
And threw his skin away.”
(What am I?)

Chapter headings in the book include, Cornish Feasts and “Feasten” Customs, Legends of Parishes, Fairies, Superstitions, Charms, Cornish Games, and Ballads. Here is a tiny sampling of some of the contents:

A Cornish Legend
~ While this is not the time or the place to get into an explanation for the many standing stone monoliths that pepper the Cornish hills and valleys, I thought this local legend explaining the origins of the St. Austell Down monolith is worth quoting:

Upon St. Austell Down is an upright block of granite, called “the giant’s staff, or longstone,” to which this legend is attached:

“A giant, travelling one night over these hills, was overtaken by a storm, which blew off his hat. He immediately pursued it; but, being impeded by a staff which he carried in his hand, he thrust this into the ground until his hat could be secured. After wandering, however, for some time in the dark, without being able to find his hat, he gave over the pursuit and returned for the staff; but this also he was unable to discover, and both were irrevocably lost.

In the morning, when the giant was gone, his hat and staff were both found by the country people about a mile asunder. The hat was found on White-horse Down, and bore some resemblance to a mill-stone, and continued in its place until 1798, when some soldiers rolled it over the cliff. The staff, or longstone, was discovered in the position in which it remains; it is about twelve feet high, and tapering toward the top, and is said to have been so fashioned by the giant that he might grasp it with ease.” —Murray’s Guide

Oh, God — Not Rabbit Again!
Then there was the vicar of a local parish who, much to the horror of the parishioner at whose table he was sitting, is said to have offered the following piece of doggerel in the place of the pious grace they were expecting to hear before they began to eat:

Apparently the vicar had dined out several days in succession, and rabbit had been offered to him at every meal!

How To Catch A Thief Cornish Style
“A farmer in Towednack having been robbed of some property of no great value was resolved, nevertheless, to employ a test which he had heard the ‘old people’ resorted to for the purpose of catching the thief. He invited all his neighbours into his cottage, and, when they were assembled, he placed a rooster under the ‘brandice’ (an iron vessel, formerly much employed by the peasantry in baking). Every one was directed to touch the brandice with his, or her, third finger, and say: ‘In the name of the Father, Son, and Holy Ghost, speak.’

Every one did as they were directed, and no sound came from beneath the brandice. The last person was a woman, who occasionally laboured for the farmer in his fields. She hung back, hoping to pass unobserved amongst the crowd. But her very anxiety made her a suspected person. She was forced forward, and most unwillingly she touched the brandice, when, before she could utter the words prescribed, the rooster crowed. The woman fell faint on the floor, and when she recovered, she confessed herself to be the thief, restored the stolen property, and became, it is said, ‘a changed character from that day.’ ”
- o0o -
Kernewek Lowender Cornish Festival ~ Given that the book was first published in 1890, one wonders just how many of the customs and traditions recorded in Cornish Feasts and Folk-Lore, are still remembered and repeated today. I suspect there are not a lot. However, you just might hear some of them during the Kernewek Lowender Cornish Festival, which is taking place over the weekend of May 19-21 in South Australia’s Copper Triangle.

Also referred to as the Copper Coast, this geographic region on Yorke Peninsula includes the towns of Kadina, Moonta, and Wallaroo. Copper was mined in the area during the late 19th and early 20th centuries. Today the three towns at the centre of the region are proud to maintain their Cornish heritage at a festival that is said to be the largest of its type in the world. So put the festival dates in your diary, and make the trip. The Cornish pasties alone should be worth the drive.

Oh, and the answer to that riddle: An orange.
Posted by Jim Lesses at 9:43 AM