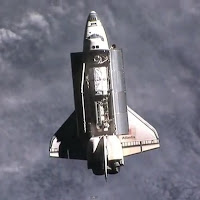 ~ I have said it before, but it doesn’t hurt to  repeat it from time to time: the world really is a beautiful place, and the two films I have selected today for the Monday Movies reflect that very much. The first is a stunning seven minute NASA video of footage shot from the international space station and presumably from various Space Shuttle flights. The video is narrated by Dr. Justin Wilkinson from NASA's astronaut team.

In the film you can see some of the planet’s most impressive landscapes, including the coast of Namibia, Tunisia and Madagascar, along with Sicily, China, the Zagros mountains in Iran, Australia’s Gulf of Carpenteria, and the Great Salt Lake in Utah to name some of the birds-eye views on offer.

The second video is less than three minutes in length, but shows a full year in the life of our nearest neighbour – the moon. The time-lapse footage is quite hypnotic, but for me the real impact comes from comparing the views that both films offer of life in our universe. The stark contrast between the ever changing, blue, green and red landscape that is our beautiful planet, with that of the bare pockmarked surface of the moon, is frighteningly obvious.

As I said about another recent Monday Movie featuring different footage from the International Space Station:

"... if you think we humans are going to find a better place elsewhere in the universe – you are kidding yourself. This is it. This really is as good as it gets, and the sooner we accept that, the sooner we can focus on protecting the planet, and doing everything possible to ensure it, and we, survive for many future generations."

Touring The Earth From Space 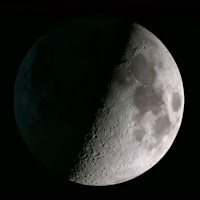 A Year in The Life of The Moon

If you were stuck somewhere far away from the recent lunar eclipse, here’s some consolation courtesy of NASA. The Scientific Visualization Studio at the Goddard Space Flight Center has put together this two and a half minute video from over a year’s worth of data recorded by the Lunar Reconnaissance Orbiter (LRO), which has been orbiting the moon at 50 kilometers above its surface for over a year.

Related Content:
Touring the Earth from Space (in HD)
The Best of NASA Space Shuttle Videos (1981-2010)

Thanks to Open Culture for bring this to our attention.
Posted by Jim Lesses at 11:50 AM