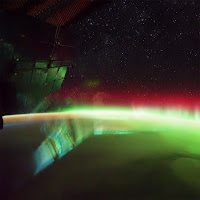 This video has been getting a lot of attention since it was released by NASA during November. The five minute time lapse film consists of "...sequences of photographs taken with a low-light camera by the crew of expeditions 28 and 29 onboard the International Space Station." The images where shot from August to October, 2011, at an altitude of around 350 km.

Watching the film, I was amazed at the number of storms that seem to be taking place at any one time, somewhere on the planet – as indicated by the numerous lightning flashes that you see throughout the flyovers.


Among the highlights of the film are images of the Aurora Borealis and the Aurora Australis;  a view of the Northwest coast of United States and Central South America; Central Africa and the Middle East; Islands in the Philippine Sea; the Mideast at Night; the Mediterranean Sea, and Eastern Europe.


This film really makes me appreciate the fragile planet we all share and inhabit. From a height of 350 kilometres the world truly is a beautiful place, a fact we can easily – and all too often do – lose sight of as we crawl around down here at surface level. Let me tell you, dear reader, if you think we humans are going to find a better place elsewhere in the universe – you are kidding yourself. This is it. This really is as good as it gets, and the sooner we accept that, the sooner we can focus on protecting the planet, and doing everything possible to ensure it, and we, survive for many future generations.


Make sure you set the video to full screen mode, then sit back and enjoy…


EARTH from Michael König on Vimeo.
Posted by Jim Lesses at 4:16 PM