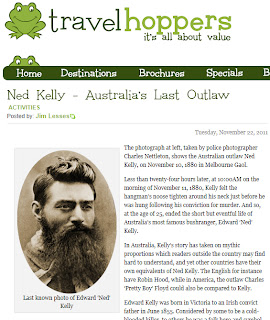 My second piece for Travelhoppers on the Australian outlaw, Edward 'Ned' Kelly is now online.

The post looks at the legend of Ned Kelly as it survives today, and provides a route map for a suggested road trip through Kelly's life and subsequent death, for true crime fans, and for travellers interested in Australian history and the story of the Ned Kelly.

It may seem incredible, but the story of Ned Kelly still resonates across the years, despite his death by hanging on November 11, 1880 at Melbourne Gaol. In fact, it wasn't until recently that his remains were finally identified and returned to surviving family members for burial or disposal as they see fit.

However, the lingering mystery of what has happened to Kelly's missing skull remains. Forensic examination of a skull thought to be Edward Kelly's and in the possession of a Western Australian family for 30 years, now turns out not to be the skull of Ned Kelly, but quite possibly the skull of another criminal also hanged at Melbourne Gaol.

It all makes for fascinating reading for history buffs and true crime fans alike, and a good place to start your examination of the Kelly legend might as well be my piece for Travelhoppers.
Posted by Jim Lesses at 12:18 PM